Jason Mercier is garnering so many accolades, trophies, and cashes, eventually he’s going to be “so sick and tired of winning,” as President Donald Trump would say. The PokerStars Team Pro scooped two trophies at the American Poker Awards on Thursday evening in Beverly Hills, California. 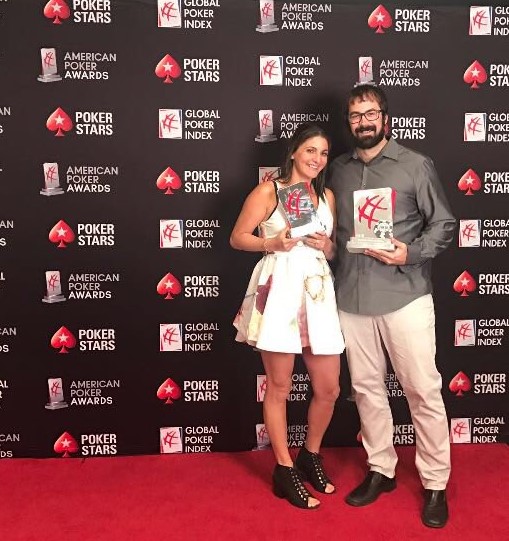 The Floridian nearly won three bracelets in less than a two-week period at the WSOP. He beat out some tough competition for the award, including Mike Sexton’s first WPT title. Mercier also took home the WSOP GPI Player of the Year trophy.

“Extremely honored to win ‘Moment of the Year’ for my WSOP run! 2 awards in one night. #feelsgood,” Mercier wrote with a photo of him and wife Natasha he posted on his Twitter feed.

Mori Eskandani is a poker legend. The long-time producer and founder of Poker PROductions received the Lifetime Achievement award. He received a standing ovation, but was unable to attend the event.

His company has produced many of the most popular poker television shows of all-time. That includes High Stakes Poker, Poker After Dark, National Heads-Up Poker Championship, and the Super High Roller Bowl. Poker PROductions has also produced the WSOP for ESPN since 2011.

“What an amazing honor. Wish I was there, although I would have been speechless after Kara’s speech. Special thanks to all the poker players for making my job easy,” Eskandani wrote.

David Peters and Cate Hall were presented with trophies for GPI Male and Female Player of the Year. They won the award automatically for scoring the most Global Poker Index points in 2016. Maurice Hawkins scooped the Breakout Performance of the Year category. The Floridian won a pair of WSOP Circuit rings last year.

Ari Engel was also nominated for the same award, but didn’t win. But he did take home the award for Tournament Performance of the Year for his memorable win in the Aussie Millions Main Event. Mike Sexton came up short again in this category.

Dan Smith won arguably the most important award of the night. That is the Charitable Initiative of the Year award. The poker pro raised $1.7 million for charity, far exceeding his goal.

Joe Ingram (known as ‘joeingram1’ on YouTube) scored the Podcast of the Year trophy. The pot-limit Omaha specialist routinely interviews the biggest names in the game and isn’t afraid to give his two cents on the hottest topics in poker.

The $300,000 buy-in Super High Roller was honored as the Event of the Year. The tournament beat out the WSOP Main Event, WPT Five Diamond, and Seminole Hard Rock Poker Open.