Jason Koon is the first $1 million winner in a live poker tournament since this summer’s World Series of Poker (WSOP). The high stakes pro took down the Seminole Hard Rock Poker Open championship Main Event in Hollywood, Florida. He beat out an 847-player field to take home the biggest score of his already impressive poker career. 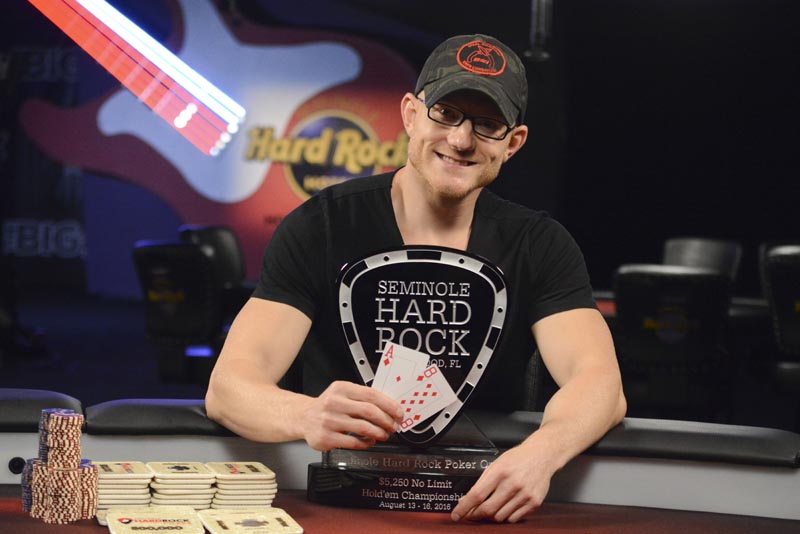 The $1 million win puts him over the $5 million career mark in live tournaments, more than three times that of his nearest competitor on West Virginia’s all-time list. But this isn’t his only major title recently. Last month, the pro claimed first place in a $25,000 Bellagio High Roller tournament for $514,080. It’s been a good summer for Koon, despite only four cashes at the WSOP.

Many of the game’s top players descended on South Florida on August 13 for the $5,250 buy-in, $5 million guaranteed tournament at the Hard Rock in the Sunshine State. The list included Jason Mercier, Erik Seidel, Tom Marchese, and, of course, the eventual champion.

Koon wasn’t the only player at the final table who tops his home state’s all-time money list chart. Joe Serock, with over $3.2 million in lifetime winnings, has triple that of anyone else in New Mexico history. The WPT Season X Player of the Year finished 6th in the SHRPO Main Event for $150,000.

With the tournament down to its final two competitors, Seth Davies, Koon’s close friend, moved all-in pre-flop with Q♣J♠ and was quickly called by Koon and his A♦8♦. It was a classic 60/40 situation to start, but the A♠7♠3♣ flop left Davies in desperate need of a runner-runner combination.

The 3♥ left the runner-up drawing dead. An 8♣ on the river improved Koon’s hand to two pair, but he didn’t need it, of course. The title gave Jason the first seven-figure payday of his poker tournament career. Davies received $575,000 for second place.

The rest of the final table went as follows:

Champs for the Champs

Jason Koon was ecstatic after winning the tournament. And it appeared the victory was even more special because of who he defeated heads-up.

“I feel fantastic. I mean, it’s a great result, it’s a lot of money, and I got to play heads-up with my buddy . . . It’s a special moment,” the champ told BJ Nemeth of SeminoleHardRockPokerOpen.com.

Koon wasn’t the only big winner at that South Florida casino. Marvin Rettenmaier defeated 105 players in the $25,000 High Roller event for $787,497. Rettenmaier, one of the top German poker players of all-time, admitted he went on a heater to win the tournament.

He said he picked up a plethora of big pocket pairs late in the tournament. The high roller champion now has over $6.4 million in lifetime live poker tournament winnings. Luck clearly isn’t the only thing on his side.

Editor’s Note: Check back with us tomorrow for Chad Holloway’s exclusive interview for CardsChat with Marvin Rettenmaier.