The 2016/2017 World Series of Poker Circuit regular season came to an end this past weekend, with the conclusion of the WSOP Circuit Harrah’s New Orleans. This final stop consisted of a dozen gold ring tournaments, including the $1,675 Main Event. Jason Baldridge, a 34-year-old cash game rounder, took the top prize, winning $227,417, his first bit of WSOP hardware, and a seat into the season-ending Global Casino Championship in August. 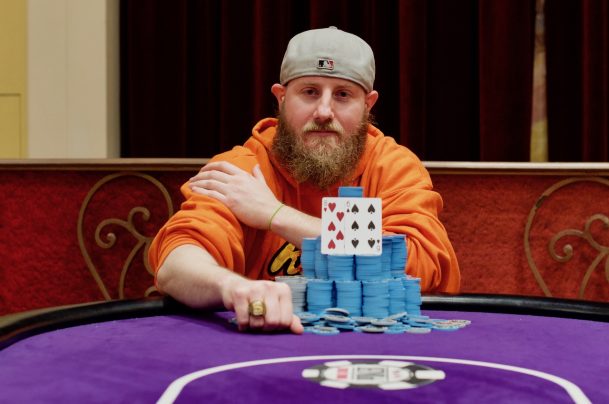 Jason Baldridge was primarily a cash game players before transitioning to tournaments and promptly winning $227,412 in the “Big Easy.” (Image: WSOP)

“I play cash games when I go to tournament spots, usually,” Baldridge told WSOP officials. “I travel with Jose and I’ll play some tournaments, but I never really took them seriously.”

Earlier this month at the Horseshoe Baltimore, Baldridge earned his first-ever WSOP-related tournament cash finishing sixth in Event #12, a $365 No-Limit Hold’em Turbo Double Stack, for $2,683. Fast forward two weeks and he’s not only got himself a gold ring, but a six-figure payday to boot.

After the dealer burned and turned the 10♥, Tait checked, Baldridge bet 450,000, and Tait check-raised to 1.45 million. Baldridge called and the A♣ completed the board on the river. Tait moved all-in, and Baldridge called with the 8♥6♠. His pair of eights was good. Tait was bluffing with 9♥7♠. Tait earned $140,192 for finishing in second place.

In Event #5, $580 No-Limit Hold’em, Marshall White topped a field of 204 entries to win $26,521 and his third gold ring. He then finished second place in Event #7, $365 No-Limit Hold’em, the next day, and then followed that up with another runner-up finish in the High Roller two days later.

Toss in a 30th-place finish in the Main Event, and White amassed 135 points during the WSOP Circuit Harrah’s New Orleans stop, enough to make him the Casino Champ.

That honor would normally give him a seat into the Global Casino Championship.  But White had already secured his seat by earning the Casino Champ title at the Harrah’s Cherokee stop earlier in the season. (In such a situation, the WSOP adds an extra seat into the Championship tournament’s at-large qualifier pool.)

Speaking of the $2,200 High Roller, a tournament that drew 197 runners, 27-year-old poker pro Michael Lech won that event for $106,377 and his second gold ring. Lech, originally from Arkansas, is something of a poker vagabond who spends his time bouncing around Latin America.

Last summer, he finished second in the $888 Crazy Eights event at the WSOP for more than $400,000, and he followed that up by winning his first gold ring in the WSOP Circuit St. Maarten’s $365 No-Limit Hold’em 6-Max event. Lech said he happened to be in New Orleans visiting cousins when he saw the circuit was in town. Obviously, his decision to play a little poker paid off big.