The All Japan Poker Championship (AJPC) announced this week that it will be expanding its events to other Asian countries, with new tournaments scheduled for both Macau and Taiwan in the coming year. 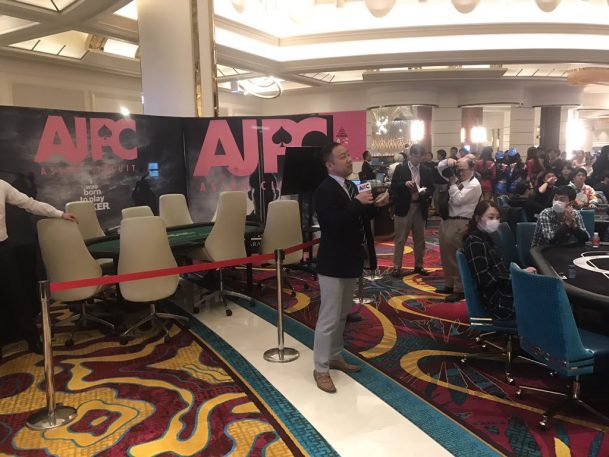 The All Japan Poker Championship is expanding its Asian Circuit after a successful event in South Korea. (Image: Twitter/@ajpc_ac)

The international move for the Japanese tournament series began in December, when the AJPC held a tournament that Paradise City casino in Incheon, South Korea. Nearly 800 players came out for a series of tournaments over five days.

On Monday, the AJPC announced that they would be holding tournaments throughout Asia this year, both returning to Incheon and adding the new destinations to their calendar.

“This is in response to our players’ desire to enjoy tournaments overseas, with a focus on Incheon, Taiwan, Macau, and potentially other destinations, in Southeast Asia,” said AJPC CEO Yasuhiro Sasaki.

At the moment, there’s little information about these new events. Partners and venues have yet to be announced for the planned tournaments in Taiwan and Macau.

If they’re anything like the AJPC event in South Korea, players can expect to see fairly large fields and prize pools, as well as a lot of players traveling from Japan to participate.

At the Paradise City series, more than 300 players traveled from Japan to play, with Toru Nakata taking down the main event and winning 36.2 million South Korean Won ($33,700).

The new events will be included under the AJPC Asian Circuit banner, an international series that was announced before the tournaments in South Korea last month.

Many Japanese players who have made their mark on the poker world got their start with the AJPC and still associate with the organization, including 2016 APT Player of the Year Iori Yogo and Takashi Ogura, who finished 64th in the 2012 World Series of Poker Main Event.

Poker’s growth in Japan could be supercharged this year, as Japanese lawmakers continue to craft regulations allowing for integrated resorts to be built in the country. When this year’s legislative session began, Prime Minister Shinzo Abe said that the advancement of necessary bills would improve Japan’s status as a tourism destination.

Upon passage of necessary bills, there will be no shortage of major gaming firms who will try to earn a license in Japan, which is widely seen as one of the last great untapped markets for gambling in the world.

Las Vegas Sands and MGM Resorts have each said they would spend as much as $10 billion to build a resort in the country, while Melco Resorts President Lawrence Ho has said he would spend “whatever it takes” to earn a license.