Jason Mercier has the $10K H.O.R.S.E., Event #30, firmly in his reins after Day One, while James Obst and Tyler Groth are proud owners of some shiny new gold after Thursday’s events wrapped. 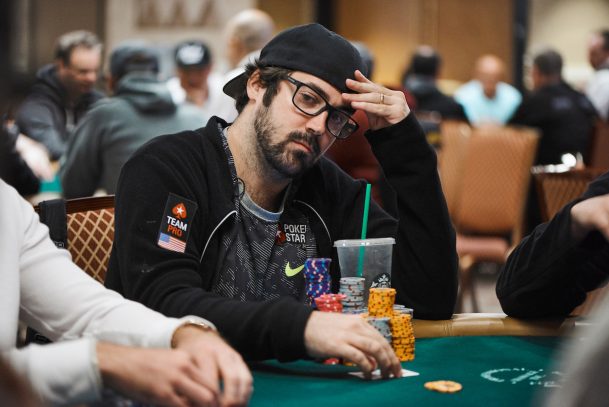 Jason Mercier sits out front in the race for H.O.R.S.E champion, as he enters Day Two of Event #30. Winner will take home $383,208. (Image: Antonio Abrego/pokerphotoarchive.com)

Obst was the day’s first bracelet winner. He defeated 97 players to conquer Event #26, the $10,000 Razz Championship for $265,138. The Aussie defeated Eric Kurtzman in a hard-fought heads-up battle.

With over $2.5 million in live tournament cashes, Obst has been one of the most consistent performers at the WSOP in recent years. Daniel Negreanu has even called out Obst as one of his toughest foes at any given table, and a comtender for the WSOP Player of the Year honors.

He’d been so close to winning a bracelet since 2014, nine times finishing in the top 10 heading into Thursday. On this day, he finally got over the hump to take down his first WSOP event. Obst is likely to be in the Player of the Year running all summer. He finished 2nd in Event #7 and 8th in Event #17.

Tyler Groth, meanwhile, entered Event #25, the $1,000 Pot-Limit Omaha on Tuesday, with a modest $6,000 in career live tournament cashes. He finished up play on Thursday with over $185,000 lifetime. The Las Vegas resident mastered the event for $179,126, his first cash at the World Series of Poker. He beat a field of 1,058 players, including runner-up Jonathan Zarin.

It’s far too early to assume Jason Mercier won’t repeat as Player of the Year. He may not win two bracelets this summer like he did in 2016, but he has the talent to challenge Obst and others for the award.

The Team PokerStars Pro finished Day One with the chip lead in Event #30, the $10,000 H.O.R.S.E. Championship. He is going for his second straight victory in this event.

Daniel Negreanu is closing in on his 100th career WSOP cash. He finished 42nd in Event #28, the $1,500 Limit 2-7 Lowball Triple Draw on Thursday, making it his 97th cash in a WSOP event. On Twitter, he announced he will hit number 100 sometime “this summer.”

Brendan Taylor holds the chip lead heading into the final table in that event on Friday with six remaining players. Negreanu is still alive in the $10,000 H.O.R.S.E., and could pick up cash number 98 this weekend.

Event #23, the $2,620 Marathon has completed a grueling four days of play. On Friday, we will finally play down to a winner.

There are 13 players remaining, with Joseph Di Rosa Rojas (10,575,000) from Venezuela out in front. The “Homeless Millionaire,” Faraz Jaka, has 36 career cashes, but is still seeking that first bracelet. He has an average stack (3,215,000) heading into Day Five.

Event #27, the $3,000 No-Limit Hold’em 6-Handed will also crown a champion on Friday. This tournament has 21 players left, and Max Silver holds a massive chip lead.

Event #19, the $365 Giant has its second Day One starting flight beginning at 7 pm. Day Two will restart on July 8.