James Holzhauer, Ken Jennings Will Battle on Jeopardy in January

The moment Jeopardy fans around the country have been waiting for – James Holzhauer versus Ken Jennings – will soon happen. On January 7, the two trivia game show superstars will join fellow G.O.A.T. Brad Rutter in a televised contest guaranteed to draw huge TV ratings. 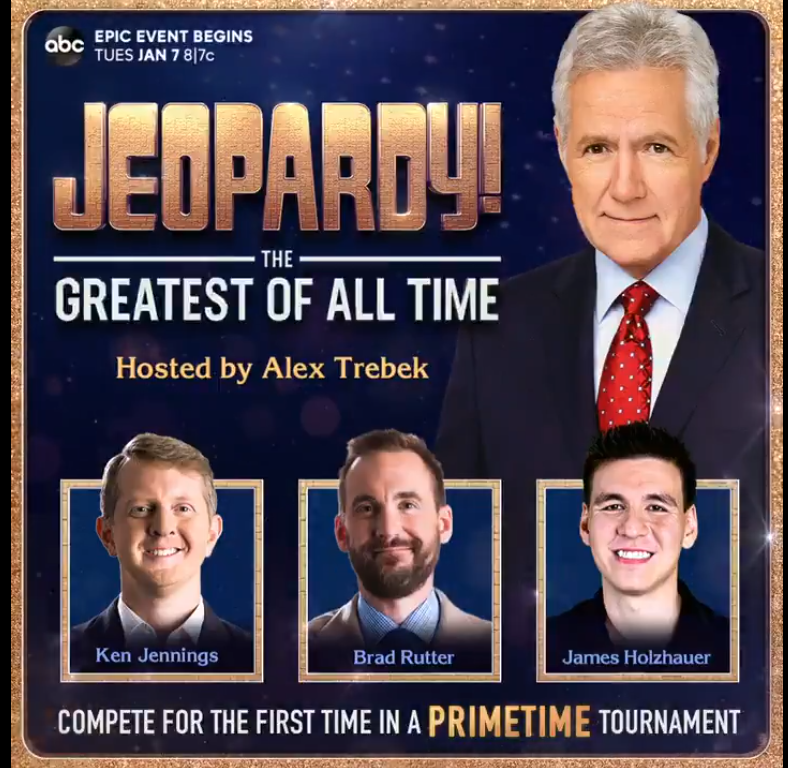 Holzhauer, as expected, recently claimed the 2019 Jeopardy Tournament of Champions title. He won $250,000 in the process thanks to his impressive performance on the TV trivia game show. The Las Vegas sports bettor also avenged his loss in June to Chicago librarian Emma Boettcher, the only contestant to defeat him in 33 games.

“Jeopardy James” won more than $2.4 million on the show prior to the Tournament of Champions. In January, he’ll compete in what will likely be the highest rated TV game show match in history.

Is Holzhauer the Best Jeopardy Contestant of All-Time?

Rutter, far and away, has won the most money on the show ($4,688,436). He first appeared on the show in 2000, and originally retired on a five-game winning streak. The Pennsylvania native has returned numerous times since for various tournaments, including the 2005 Ultimate Tournament of Champions where he defeated Jennings to win $2.1 million.

Jennings is one of the most legendary game show contestants of all time. In 2004, he won 74 consecutive games, an no one has even come close to matching that mark. Many believed Holzhauer had a chance, but he was stopped short by Emma Boettcher at 32 consecutive wins in June.

There’s no doubt these are the three greatest Jeopardy contestants ever, but the question is, which one of them is the best of the best? You’ll have to tune in to ABC beginning Jan. 7 to find out.

The show, dubbed “The Greatest of All-Time,” consists of a series of two back-to-back games. Whoever racks up the most points will win the “match.” The first player to win three matches, will win the competition and $1 million. A $250,000 consolation prize will be awarded to the other contestants.

Holzhauer isn’t too busy preparing for the $10,300 Partypoker Millions World Main Event on Nov. 19 to trash talk Jennings, who returned the favor.

All proceeds go to buying @James_Holzhauer a nice sport coat or blazer, and maybe even a necktie https://t.co/6zPNEbylGG

Rutter has yet join the trash talking fun. Perhaps, he’s going to stay silent and let his performance in January do the talking? We’ll find out in a couple of months.