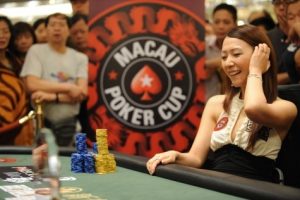 The Macau Poker Cup is one of the biggest poker events in Asia. (Image: PokerStars.net)

Poker is on the rise in Asia, and there’s no bigger market for the game in that part of the world than Macau.

That makes the Chinese gambling enclave a natural host to some of the biggest poker tournaments in Asia, including the Macau Poker Cup.

The latest Macau Poker Cup (MPC), the 23rd edition of the series, tok place at the PokerStars room in the City of Dreams casino from August 28 through September 13.

Eighteen events were held in total, including some unique ones, like a Team Event that was won by a pair of players from India.

But two events clearly stood out from the rest for their importance to the local poker scene.

First was the High Roller, a two-day event which began on Friday.

With a buy-in of HK$80,000 ($10,300), the even wouldn’t qualify as a high roller by the standards of a major tournament festival in the United States or Europe; still, it was easily the biggest event of the MPC, carrying four times the buy-in of any other tournament.

The tournament attracted 75 entrants, most of whom were from China and other Asian or Pacific nations.

But there were exceptions: American Scott Davies, who is no stranger to tournaments anywhere in the world, finished in 7th place, while Englishman Tom Alner made a great run to finish in third place.

After the final table raced along, the heads-up battle pitted James En Ning Chen of Taiwan against Japan’s Makoto Yoshimichi.

Of the two, Yoshimichi clearly had the experience edge: he had over $300,000 in cashes ranging from small events in Asia to the World Series of Poker, while Chen had just one prior cash, a runner-up finish in a MPC event this February.

But it was Chen who would quickly claim victory.

On the last hand, Yoshimichi moved all-in on the turn with a pair of tens and was quickly called by Chen, who had pocket jacks. Yoshimichi couldn’t improve on the river, handing Chen the victory.

Even bigger prizes were on tap in the Main Event, known as the Red Dragon, which attracted an impressive field of 945 players.

The tournament stretched out over an entire week before ending on Friday in a victory for China’s Yue Feng Pan.

Pan started the final table in fourth place in chips, but had no trouble chipping up throughout play, ultimately entering heads-up play with Shao Po Liu with a 2-1 chip advantage.

After about an hour of play, the two clashed in a finale that saw both players make hands.

The money went all-in on a 6-T-T board, with Pan moving all in with T4 for trips against Liu’s Q6, good for two pair. A queen on the turn gave Liu some hope, but a river six only made him a lower full house, clinching the title for Pan.

Pan reportedly focuses most of his time on cash games; according to his Hendon Mob page, he has only one prior tournament cash, which came in last year’s World Poker Tour National event in China.