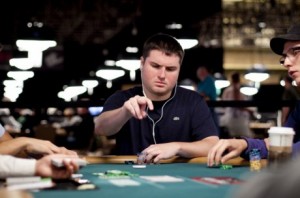 One of the favorite stops on the World Poker Tour (WPT) each season is at Bay 101 in San Jose, California. The Shooting Star tournament offers bounties on some of the most well-known players in the game, and the fans line up to cheer for their favorites and obtain autographs. The atmosphere is a fun one.

This WPT Bay 101 Shooting Star event of 2014 offered a $7,500 buy-in with a single reentry allowed per player. There were $2,500 bounties on each of the Shooting Star players, as well as the promise of a $10K bonus for the chip leaders of each of the two starting days. More than 50 players agreed to be Shooting Stars this year.

Day 1B added another 401 entries to the tournament, with 27 Shooting Stars among them. The field remained open for reentries until the beginning of Day 2, but was already up to 713 entries to that point. Only 183 players made it through that night, and Lucas Ke was atop the leaderboard with 252K chips for his $10K bonus. James Carroll ended his night near the top of the pack with 191K chips.

Day 2 started with 297 returning players but added several more entries to set the field at 718 total, which far surpassed the previous year’s total to become the most well-attended WPT Bay 101 in its history. The prize pool was set at $5,133,700, which would be used to pay the top 72 players a minimum of $14,430, and first place prize of more than $1.2 million.

Day 2 reduced the field to 36 players, bursting through the money bubble at the expense of 73rd place finisher Justin Zaki. Some who exited in the money included Jason Koon, David Chiu, Joe Hachem, Loni Harwood, Andrew Lichtenberger, and Ryan Riess. When the bags of chips were counted for the final 36, Steve Sung was in the lead with 1,812,000 chips, while James Carroll was holding on with 468K chips.

Play started on March 14 slowly, but Wilkerson quickly took charge while Carroll took the hit. Wilkerson then eliminated Greer in sixth place, but Carroll stepped up to send Le out in fifth. Suller doubled through Wilkerson, and Pahuja took the opportunity to soar into the chip lead. But after 100 hands of play at the final table, Carroll emerged as the chip leader through a series of quiet but deadly hands for his opponents.

Wilkerson eliminated Pahuja in fourth place and regained the chip lead, but Carroll then send Suller out in third place with a straight over two pair.

Heads-up play began on the 158th hand of the final table with Carroll holding 12.45 million chips and the lead. Wilkerson started with 9.1 million but chipped up into the lead rather quickly. Carroll then evened the stacks just as fast by winning a pot worth 5.05 million chips, and he then took a slight lead.

On the 172nd hand of the final table, the two players saw a raised flop of 9c-4h-2s. A bet and check-raise led to the 2c on the turn, at which point Wilkerson pushed all-in for 4.5 million chips. Carroll check-called with 6s-4d and two pair. Wilkerson showed Ah-5c for the straight draw, but the Qh didn’t complete that straight, leaving Wilkerson out in second place.