Pennsylvanian Jake Schindler will be hoping to add $6 million to his current lifetime live tournament cash stash of $9.25 million at the 2017 Aria Super High Roller Bowl today in Las Vegas. With only three left in the nosebleed $300,000 buyin event, today’s the day someone will walk home with the massive moolah. 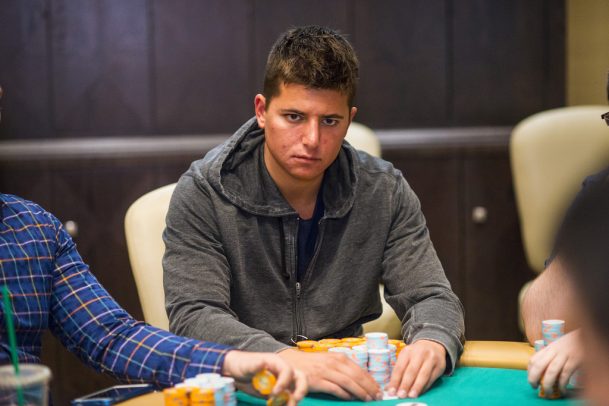 Jake Schindler (seen here at a WPT event in 2015) holds a sizable chip lead heading into the final day at the 2017 Super High Roller Bowl, thanks in large part to a huge pot he won against Pratyush Buddiga holding pocket eights.  (Image: Flickr)

Day Four’s action began on Wednesday afternoon with eight of the original 56 entries remaining. The first to bust was bubble boy Jason Koon, and it was a painful exit at that, as only seven players are paid.

The 8th place finish was good for exactly zero dollars, $600,000 less than had Koon moved up just one spot. That’s how stressful a tournament is of this magnitude. But he didn’t seem too angry afterwards.

Pratyush Buddiga, the 2002 Scripps National Spelling Bee champion, busted Koon. The hand catapulted him into the chip lead. The remaining players were able to relax more knowing they were guaranteed a solid cash. But it was hours before the next player busted.

Buddiga had momentum and a solid chip stack on his side. Things were going great for the Upswing Poker coach. And then poker happened.

Buddiga took a strange line and opted to check instead of going for value. Schindler, not wanting to slow play his set, fired out a 400,000 bet, and was called. The 3♠ flipped over on the turn, a complete blank. The spelling bee champ checked, and the button bet 750,000, again receiving a call.

The river was the 3♣, giving Jake a full house. Buddiga checked again and then Schindler went all-in for 2.5 million.

Pratyush found himself in quite a sticky situation. The board, other than the queen, was dry. He beats hands such as A-Q or a missed flush draw. After a minute of thought, he said, “I don’t think I can fold this.” That was music to Schindler’s ears. A minute later, Pratyush made the call and received the bad news.

This is the second consecutive year that the Germans dominated in the SHRB final table. Vogelsand and Schillhabel will be representing for the motherland this time. Last year’s champion Rainer Kempe and 2016 runner-up Fedor Holz both hail from Germany as well.

Day Five can only be viewed on the PokerGO app. It costs $10 per month for a subscription. Ali Nejad and Nick Schulman will provide commentary.