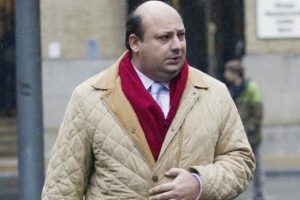 Former poker player and mega fraudster Achilleas Kallakis has seen the last of his assets put up for sale. (Image: AOL Money UK)

Property fraudster Achilleas Kallakis has seen the latest of his ill-gotten assets put up for sale with a staggering price tag.

According to London’s Evening Standard newspaper, the luxury office block was owned by Kallakis who was jailed for fraud in 2013. After a court found Kallakis and his accomplice Alex Williams guilty of mortgage scam worth £750 million ($916 million), Kallakis was jailed for seven years and stripped of his assets.

Among those assets was the St James’s Square office block which was worth upwards of $61 million at the time of purchase. However, after the fraudster was put behind bars for his crimes, the property was taken over by one of his victims, Ireland’s Allied Irish Bank.

Bank Takes Back Its Asset

Because the bank provided Kallakis with a mortgage for the property, it became the official owner after he was convicted. Following the transfer of ownership, the Allied Irish Bank sold the London asset to Green Property in 2008.

With a prime location and 60,000 square feet to play with, Green Property renovated the property and eight years on, it’s now on the market and getting offers in excess of $244 million. At this stage any offers are being kept under wraps, but when the sale goes through it will go down as one of the most expensive properties in London and the United Kingdom as a whole.

Unfortunately for Kallakis, his interest in the property vanished a long time ago. However, the current price tag does show how significant his fraudulent activities were.

From Property to Poker

For those who can remember the early days of the poker boom, Kallakis was a regular on TV. Often found sitting alongside European stars such as Dave Ulliott. Marc Goodwin and Paul Jackson, Kallakis often played the part of the loose aggressive businessman.

Despite his willingness to gamble, Kallakis actually had a modicum of success at the felt. As well as making a few dollars in televised cash games, he banked $319,390 in live tournament earnings thanks to money finishes in events such as the Monte Carlo Millions and the World Open.

But, at the time he was making moves in the poker world, he was also using fake documents and guarantees to defraud major banks out of millions. Indeed, when the full extent of his crimes came to light it was easy to see why he was so willing to sit down with the best poker players in the world.

Unfortunately for Kallakis, those days are now over and it’s highly unlikely we’ll see him back in the poker world any time soon.