Ivey League will no longer be uploading new content to its website as of May 1. The poker training site has decided to discontinue its service due to “the current state of online poker,” the company released in a statement posted on its public forum. 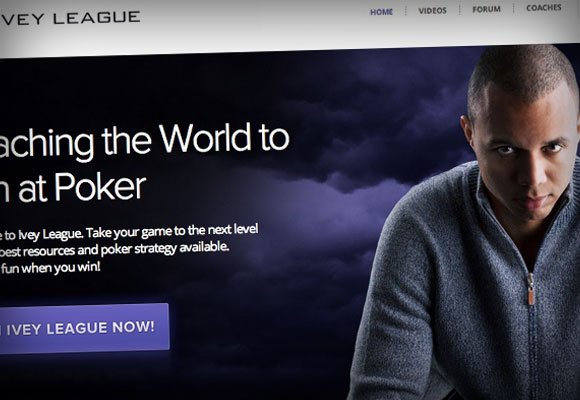 The statement did not address specifically what “the current state of online poker” meant. It’s unclear what has happened in the world of internet poker recently that has caused this decision.

The poker training site is, of course, named after and owned by Phil Ivey. He purchased Leggo Poker in 2013 and transformed it into Ivey League. The name is a spinoff of the Ivy League, a college athletics conference filled with some of the top academic institutions in America.

Ivey launched his new site in February 2014. Since then, his company has produced regular new training videos to help customers improve their poker game. On May 1 and beyond, only old videos will be available.

Ivey League students have the option to pay monthly or receive a discount by paying upfront for an entire year. Prorated refunds will be made for annual subscribers.

Patrik Antonius, once considered among the most feared high stakes cash game players in the world, has been a trainer since Day One. Andrew “Lucky Chewy” Lichtenberger was a Leggo Poker coach and stayed on after Ivey bought the site.

Griffin Benger, a 2016 November Niner, makes sure students check their privilege. He was once a top-rated online poker player before putting Will Kassouf in his place on Day Seven of the WSOP Main Event last summer.

Ivey League also employs a mental coach, Pawel Pitr Jablonski. He isn’t a poker player. Instead, he teaches students how to mentally prepare for a poker career.

Where Have You Been, Phil?

A few years ago, Phil Ivey was considered by nearly everyone to be the best player in the world. Some reports estimated his net worth, mostly from his poker winnings, to exceed $100 million.

But he’s been a M.I.A. on the tournament scene the past few years. Since July 2014, he has just three recorded cashes. During his career, the New Jersey native has more than $23 million in winnings and 10 World Series of Poker bracelets.

Phil Hellmuth holds the record with 14 bracelets. Many expected Ivey to eventually crush that record. But he’s been too busy playing nosebleed games in Macau and rarely enters a WSOP event anymore. Now that he no longer has to spend time operating Ivey League, perhaps Phil will soon re-enter the tournament poker scene.

The current state of poker is in a free fall because of corrupt poker sites, scandals and players who act as Ambassadors for the game when they really aren’t. A player who played for corrupt sites or sites online operating illegally are part of the problem.

A lot of the old school players or players from early online played illegally on these sites and profited illegally just like the sites….so I ask are they Good Ambassadors for the game?

We need someone who will stand up for whats right! And for the game.

This is why Governments are banning online sites. Its history is not a good one online in regards to sites.
When their is a online site or corporation that is for players , the game and transparency with a proven record then maybe we will see a upward turn to poker.
We also need Ambassadors that care for the game and how the game is perceived, willing to stand up for whats right & a voice of the players.

You are absolutely right.
If only this could happen it would make poker grow bigger than ever before.

that very sound comment
thank you providing your view of this

Such a cool name to have. Imagine if Phil Ivey was in the music business, he could call his band Poisson Ivey.