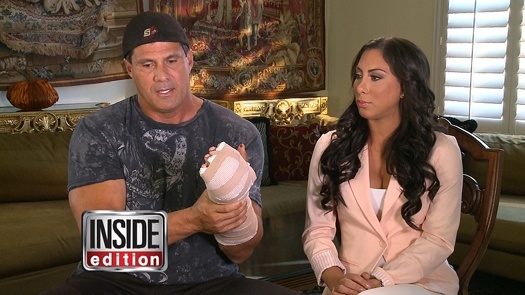 Jose Canseco’s famous falling finger of poker prank turned out to be untrue, but at least it didn’t cost him a tournament. (Image: insideedition.com)

Italian pro Gaetano Preite was disqualified from a tournament in Malta this week at the very moment he believed he had made the final table, due to an ill-judged practical joke.

According to Preite’s own account, it all happened after the final hand of Day 3 of the €990 People’s Poker Tour Main Event. Just before the players were due to break to reconvene the next day for the final, he decided to have a little fun with his old friend Nicola Luigi Abrusci.

It’s a misstep that saw Preite, a MinnieBet-sponsored pro who has previously final-tabled the event three times (twice as a runner-up), forfeit his chips, prize money, and his chance of making it fourth-time lucky.

Abrusci, who was seated at the same table as Preite, had just eliminated the last player. So Preite decided to slide a stack of chips that Abrusci had won from the losing player and “hide” them.

Management failed to see the funny side of this action, however, and summarily threw Priete out of the tournament.

Preite explained in detail what went down on Facebook: “I went over to my supporters to tell them about the joke, and then I was called to do the routine interviews and photos. I saw that Nicola had already bagged his chips, and I thought as soon as I’d finished the rituals I would go over and alert Nicola and the management to the joke. Done!”

But it was not to be. Preite was immediately informed that, while his playful intentions were not being brought into question, his actions were a violation of the rules, pure and simple, and the necessary measures would have to be taken.

“Now I understand that I may have risked too much for a simple joke,” said Preite, after he had had some time to digest the unsavory truth. “I respect the decision of the leadership of the PPT, but frankly I see it as too SEVERE [sic] because, knowing my character and my professionalism, a gentler measure could have been found.”

The moral of the story is “NEVER MESS WITH ANYONE’S CHIPS,” even if it’s for ostensibly comedic purposes.

As Preite’s plight illustrates, pranks and poker don’t mix too well, and if in doubt you should refrain entirely. Here’s more evidence to support this.

A month after Jose Canseco accidently blew his finger half off while cleaning his handgun, the following tweet by the sometimes oddball baseball legend rocked Twitter:

“OK, well, I might as well tell you. I was playing in a poker tournament last night and my finger fell off.

“Someone took a video of it,” he added, helpfully.

“My finger should have been amputated from the beginning,” he said, warming to his theme. “It was very loose with no bone to connect it. It was also smelling really bad.”

The Twittersphere reeled in alarm, but it was, of course, all a prank, albeit one widely reported as fact by many of the world’s finest poker news sources, including (cough) this one.

At the televised final of the Women’s World Poker Open in the UK several years ago, the players secretly agreed to engineer the action so that all six of them ended up all-in on the first hand of play. The hand would be void. The TD and production crew were in on the joke, but the commentators weren’t, with amusing results.

The joke backfired further down the line, however. Kara Scott, who was one of the players that day, regrets that people still replay the clip believing its real, and use it as “evidence” that women are bad at poker.

This one wasn’t so much a prank as a “psychological experiment,” but amusing nevertheless. Phil Laak decided to enter the 2008 Main Event disguised as an old man, complete with aged latex skin and white nostril hair, in order to see if his opponents played differently against him.

But did they? They sure did. By the end of the day, when some of the glue had come unstuck and the latex had started to slip, they couldn’t fold fast enough.

“I actually didn’t look like an old man close up, I looked more like an old man who had covered up some terrible skin disease with lots of bad make up,” recalled Laak afterward.

Idiot who should never be allowed to play in a tourney again. So I mean so unprofessional. The real joke here is he calling himself a professional. LOL

It’s not the best set time and place for humor. The rules are strict and in such tournaments should be really observed. Otherwise, it would be chaos. Unfortunately, he learned the hard way.