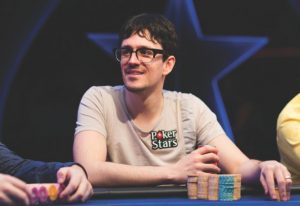 He defeated a field of 69 players (83 total entries) for his first tournament win since January.

Rainer Kempe, the defending champion and 2016 Aria Super High Roller bowl winner, wasn’t quite as lucky on Wednesday as he was a year ago. Kempe didn’t even make the money this time around.

Oleksii Khoroshenin had the most soul crushing bust out of the day.

With 12 players left, he lost an all-in against O’Dwyer. That made him the bubble boy.

With the tournament down to its final 11, Haxton held the chip lead. Once the final table approached, O’Dwyer had moved out in front. Julian Stuer also pushed ahead of the eventual champ. But then Haxton began taking control of the tournament.

After Carrel busted in 9th, Paul Newey soon went out in 8th. Then it was Pablo Fernandez’ turn to exit stage left. O’Dwyer, the chip leader when the final table began, had as much bad luck late in the tournament as he had good luck early on. He busted in 6th place.

David Yan went out in 5th place after running into a sick cooler (second-nut flush versus nut flush). Ramin Hajiyev then busted in 4th place. That left Haxton, Stuer, and Adrian Mateos to fight for the title.

Stuer and Mateos wanted to chop, but chip leader Haxton didn’t agree. He busted Mateos next with pocket tens against K-10. Haxton and Stuer were heads-up with the eventual champ holding a big chip advantage.

The €559,200 Haxton won was merely a drop in the bucket compared to the $12 million he had already won in live tournaments throughout his career.

He’s also one of the most successful heads-up online players, so it shouldn’t come as a surprise he defeated Stuer heads-up.

Haxton doesn’t play in many WSOP events anymore. He mainly plays the high roller circuit. The Nevada resident got his largest score in 2014 for 2nd place in the Aussie Million ($2,525,841).

His victory on Wednesday was his biggest since that day. The man known as ‘philivey2694’ online played like the real Phil Ivey in this event.