It’s unlikely, when Qui Nguyen sat down in the original field of 6,735 players at the Rio in Las Vegas for the 2016 World Series of Poker this past summer, that anyone would’ve predicted he would win the whole shebang. Nor would anyone likely have thought he had a single thing in common with the man who is the Republican candidate for president.

Mind you, Nguyen may or may not approve of Donald Trump’s presidential campaign. But the recently crowned champion of poker has a little something in common with the billionaire:  he’s a surprise winner. 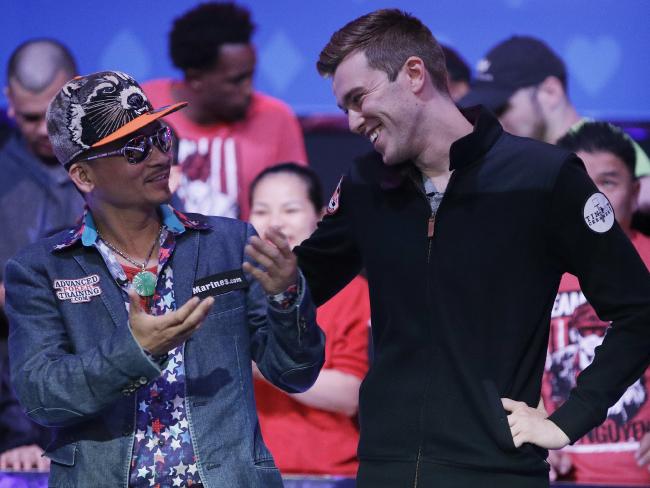 39 year-old Qui Nguyen, seen here with WSOP 2016 runner up Gordon Vayo, has some similarities to presidential candidate Donald Trump. Both are come-from-behind surprises with unpredictable styles of engagement. (Image: couriermail.com.au)

Nguyen had about as much experience in major poker tournaments as Trump had in politics prior to this past year. Before the Main Event started in July, he had just $50,000 in career poker tournament wins, with his biggest score being just over $9,000.

Similarly, when Trump entered the race to become the 45th President of the United States in 2015, political pundits didn’t take him seriously. As he built up a strong following, sports and political prognosticator Nate Silver of FiveThirtyEight went so far as to say The Donald has “no chance” of winning the Republican nomination.

Trump had no political experience and would have to beat out numerous career politicians just to make it to the general election. He did, in convincing fashion, forcing his opponents to drop out of the race long before the Republican National Convention in July.

Nguyen also brushed off his opponents at the final table of the WSOP Main Event on his way to an $8 million prize. He outlasted those 6,735 players, including hundreds of seasoned high stakes tournament pros, and he did it much the same way that Trump has managed his own campaign: by never, ever being predictable or doing anything by the book.

In 2003, a low stakes poker player by the name of Chris Moneymaker won an online satellite into the Main Event. He had never before played in a tournament of this magnitude and sat down at the table against some of the game’s biggest stars.

Back then, winning the Main Event was considered virtually impossible for an amateur. Moneymaker shocked the poker world by crushing the souls of far more experienced players who didn’t take him seriously.

His victory led to a massive poker boom. Nguyen’s improbable title probably won’t do the same, but it is possible interest in the game could spike a bit now.

Millions of people began playing poker after watching Moneymaker take down the 2003 Main Event. They were intrigued by an amateur coming out of nowhere to win millions. Nguyen could have a similar, albeit smaller, impact on the game of poker. The fact that he is 39, and not yet another 20-something whiz kid, could also help pull back more over-35ers to the recreational levels of the game, at least.

There are many similarities between the 2003 and 2016 champions. Both were amateurs who loved to gamble. Moneymaker was a sports betting junkie, Nguyen is a baccarat enthusiast. And each are likeable, humble men.

When Nguyen got heads-up with Gordon Vayo for the title, he was in unchartered territory. Not only was this the first time he had played for millions of dollars, but he lacked experienced at heads-up poker.

“I actually never played much heads-up, but I was very aggressive,” the champ said after winning.”[Whether it was] five-handed or two-handed, I was still [just as] aggressive.”

The high-pressure situation didn’t faze him. He continually put pressure on the more passive Vayo. His strategy was to raise, raise, and then raise some more. After all, he’s a gambler. It’s in his nature. Why stop gambling just because the ESPN cameras are rolling?

And that right there is where the similarities between the poker champ and Donald Trump come to an end. The Republican nominee has made countless well-documented missteps on the campaign trail, but still has a decent chance to win the election on November 8.

Nguyen, on the other hand, played nearly flawless poker for nine hours of heads-up play. And now he’s $8 million richer and the champion of the poker world for the next year.

Qui Nguyen is no self-centered poker player. Nor has he forgotten his homeland Vietnam, from whence he migrated 15 years ago, when he was just 24. The ex-pat told ESPN that 10 percent of his winnings (which is $800,000+, assuming he donates gross and not post-tax figures) will go back to the old country to combat living conditions there.

“[The average Vietnamese family] are very poor and hungry,” said Nguyen before the final playdown. “Some families don’t even have blankets, but I will make sure that they are taken care of.” He noted that most families there barely scrape by on just $200 per month in income.

He also has declared a 2.5 percent donation to the Wounded Warrior Project, in honor of his brother Duc, who was a US Marine for 23 years. Duc was given several Purple Hearts for his valor while serving in Afghanistan and Iraq, and was injured repeatedly during those tours.

“I owe my brother a lot,” Qui noted. “I’m not here in the U.S. without him.” He also plans to donate to the Marines’ annual Toys for Tots fund drive which raises money and collects toys for kids whose families can’t afford any.

Nothing like name dropping. This story could have been written without having to jump in and out of politics. November 8th can’t get here soon enough.

Why do you insult Nguyen this way? compare him with a racist, sexist, crazy person is an insult to all the Asian community!