Is Chris Ferguson a Sure Thing to Win WSOP Player of the Year?

The return of Chris Ferguson this summer was a surprise to many. He had started cashing in poker tournaments last year, after a nearly five-year hiatus amid fallout from Black Friday. But this year his performance at the World Series of Poker caught even more attention, with a lot of poker fans unhappy to see this master of game theory tearing up the Player of the Year Leaderboard under new scoring rules. 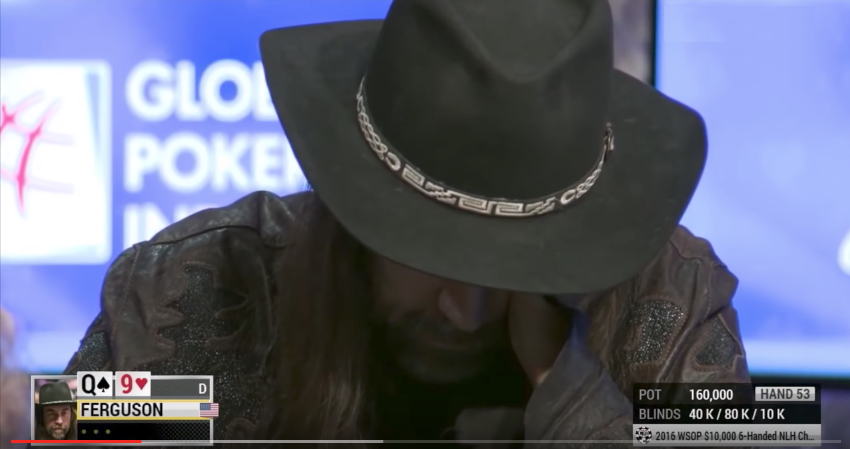 Chris Ferguson, seen here in 2016, was a dark horse to win the 2017 WSOP Player of the Year. But now if he can hold on to the point lead he built in Las Vegas, it will surely increase his notoriety as a poker villain. (Image: YouTube)

Ferguson will finish the summer in the lead for WSOP Player of the Year with 898.46 points. But he isn’t guaranteed a victory and the banner that hangs in the Rio to go with the win. The 2017 POY won’t be determined until November.

WSOP Europe runs from October 19 to November 10, at the King’s Casino Rozvadov, in the Czech Republic. It will include 11 bracelet events, all factoring into the POY race.

Ferguson, the controversial former Full Tilt Poker executive, hasn’t announced his intentions about whether or not he’ll play overseas this fall.

Regardless of how many European events Ferguson chooses to play (or not play), other pros within striking distance such as Ryan Hughes (876.35), John Monnette (865.21), and John Racener (853.16) could overtake Ferguson in Rozvadov even before the WSOPE main event.

Ferguson, of course, was a revered pro and poker-boom superstar who many fans turned on after the collapse of Full Tilt Poker impacted them personally. You could find this sentiment all over Twitter this week:

“If Chris Ferguson wins #WSOP POTY w/ this new system, the World Series is gonna have a lot of pissed off fans,” Twitter user @jblackwellpoker posted.

“So Chris Ferguson is WSOP POY? Karma, where art though,” @Stuart_Brodie asked.

Daniel Negreanu has been one of the biggest critics of Ferguson, and of the new scoring system for Player of the Year. He complained throughout the summer that the new point allotments tried too hard to reward players for surviving through large fields of amateurs, and in turn were unfair to players competing in higher buy-in events where the fields are populated by some of the most skilled and accomplished pros.

Negreanu, 8th in the current POY standings (717.76), could still mathematically catch Ferguson. But he recently announced in a vlog that he had no plans to travel to Europe and chase WSOP Player of the Year, despite previous statements that winning POY for the third time was one of his 2017 goals. (He previously won in 2004 and 2013.)

In his vlog informing the poker world of his intent to give up on POY, he offered no commentary on whether or not various PokerStars events in Europe around the same time created a conflict.

Those hoping Ferguson will be overtaken at WSOP Europe, however, don’t have history on their side. The player with the most points in the Las Vegas series has, historically, been the winner.

WSOP Europe was AWOL as a factor last year. In 2015, POY Mike Gorodinsky didn’t score any points in the Euro series. George Danzer won in 2014 and he had three cashes, including a bracelet in a $5,000 mixed game event, at WSOP Asia-Pacific, but he was already the leader leaving Las Vegas. The additional points were merely a cherry on top of his point total.

Negreanu was an exception to the rule. In 2013, he won his second POY title and needed the points he scored outside Las Vegas. He won bracelets in WSOP Asia-Pacific and Europe, both in no-limit hold’em tournaments.

WSOP Europe was completely irrelevant to the POY race in 2012. Greg Merson, that year’s Main Event champion, didn’t even make the trip to Cannes, France. Ditto for Ben Lamb, a 2017 final table member, in 2011.

So, can anyone prevent Chris Ferguson from winning Player of the Year? Yes, but if history is an indicator, odds are against it.

what a great guy to win some more money lol

true that paulsmall he don’t need the money but I’m not hating on him.
he has to earn it no one is giving him anything. I don’t blame him for Fulltilt
I blame him for not having the stones to explain it to the poker world.
but really makes me wonder what he was doing for all those absent years.