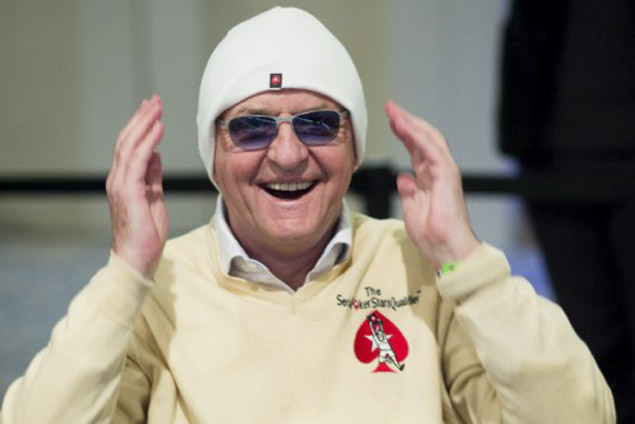 Happy happy joy joy: Belgian Pierre Neuville will pay $0.00 in tax on his WSOP Main Event winnings, thanks to a tax treaty between Beligium and the US, and a no-tax-on-gambling-winnings policy in his native country. Other players were not so lucky. (Image: pokerstars.be)

You may not have seen the IRS, the dreaded Internal Revenue Service, at the WSOP Main Event final table, but trust us, the tax collection agency was there, hovering in the wings for its pound of flesh.

Given hefty American gaming tax levels, it turns out that the IRS actually walked away with the top prize of $8.4 million for its piece of the pie, when all was said and done.

Yup, as much as it makes us wince to say it, the IRS will collect 34 percent of the entire $24.8 million prize pool, which beats Joe McKeehen’s $7.6 million first-place prize from the Main Event by a whole $1.2 million. And they never even played a hand.

As we are journalists and not brilliant with numbers, we were relieved to find the website taxabletalk.com, which does these tax calculations for us, saving us the headache.

Joe McKeehen, the night’s champion  will have to shell out self-employment tax and federal income tax, of course, which is the bitterest pill to swallow, at some $3,073,240. Then there’s Pennsylvania state income tax, which will cost him another $235,879. Oh, and the local township’s Earned Income Tax, which will set him back yet another $76,833 on top.

But How Much Did You Win?

Deals with backers aside, while McKeehen has to shell out the most money of all the November Niners, runner-up Josh Beckley gets stung with a higher percentage, by virtue of his residency in New Jersey, not traditionally considered a tax haven.

Third-spot finisher Neil Blumenfield will also be punished for living in the Sunshine State of California. At 46.86 percent, he will likely only hold on to about $1.8 million of his $3.4 million win. On the bright side, he’s an amateur, so won’t owe self-employment tax on his take. But as an entrepreneur, we’re sure he has his tax guys on speed dial, so this should be familiar territory for him.

Meanwhile, Belgian Pierre Neuville, who busted in seventh place from the November Nine, will pay a big fat zero on his winnings, thanks to a tax treaty between his native land and the US. The tax-free differential means that Neuville’s seven spot is more like a better-than-fifth place one in reality, when you look at his after-tax take home pay.

The highest individual percentage to be paid by a member of the group, however, will be poor Federico Butteroni. Not only did the young Italian finish eighth in the Main Event contest, getting to play just two hands in the process on Day One of the November Nine ESPN broadcast, but he will also be hit with a demand from the Italian government for 47.9 percent of his $1,097,056 payday.

Italy has a tax treaty with the US, which means he’s exempt from paying anything to the IRS, but the Italian government is after as much as it can gets its hands on. If we were him, we’d probably just stay in Vegas forever and head to the Venetian for a gondola ride and some pasta every time we got homesick. Problem solved.

The “unluckiest” World Series winner of all time, however, at least in terms of the fiscal burden on his winnings, was Peter Eastgate. After winning $9 million at the 2008 Main Event, he was presented with a potential $6.6 million tax bill from the Danish government, calculated by a 45 percent charge on winnings up to $520,000 and 75 percent on the rest.

It begs the question, would you accept $6.6 million to never return to the country of your birth and in doing so become a fugitive from your own government?

As far as we know, Eastgate paid his dues, but quickly resettled in London, where there is no income tax on gambling winnings whatsoever.

I still find it rediculous that the US charge so much.

”It begs the question, would you accept $6.6 million to never return to the country of your birth and in doing so become a fugitive from your own government?”
Yes for sure. With that money i can buy my family a ticket to visit me, or even a house on the beach next to my new house :D.

I’m with you on that, PFK. IRS takes more than their share and some. In Canada, all lottery/casino winnings are received tax free.