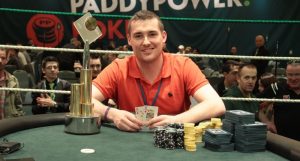 The Irish Poker Open is one of the most important poker tournaments in Europe each year. Patrick Clarke, shown here, was a big winner at last year’s event. (Image: Irish Poker Open/Card Player)

The Irish Poker Open may not get quite as much buzz as the upcoming World Series of Poker (WSOP), but the venerable old poker tournament that starts today should probably get a bit more respect, given its history.

Let’s face it: even non-poker players have heard of the WSOP, and know how much prestige comes with winning a gold bracelet, especially in the Main Event. Casual poker fans know about the World Poker Tour (WPT) and the European Poker Tour (EPT), while those more serious about the game might be able to talk about any number of regional tours and festivals.

That seems to leave the Irish Poker Open gasping for attention. While you might not know much about the tournament (which has now grown into a small festival with several events), it actually holds a rather important place in poker history.

It’s the longest continuously running annual poker event in Europe, having been run every year since 1980, when Colette Doherty won the first-ever edition of the tournament (she went on to win it again in 1991).

Worldwide, only the WSOP has a longer streak, making the Irish Poker Open one of the most-esteemed  poker events still running today.

Players from Ireland, UK, and Beyond

Today, the tournament has become bigger and more prestigious than ever. Now known as the Paddy Power Poker Irish Open, the tournament series begins today and runs through April 6 at the Double Tree by Hilton Hotel in Dublin.

The Main Event, which lasts for four days, has a €3,500 ($3,800) buy-in and tends to attract the best players from Ireland and the United Kingdom, along with a smattering of strong pros from around the world.

This year’s edition of the Irish Open includes a number of interesting events. On April 4, the two-day Liam Flood Memorial begins. This €1,125 ($1,330) tournament is dedicated to the memorial of Flood, who is one of the biggest legends in Irish poker history.

Flood won the Irish Poker Open in 1990 and 1996, and also had a second-place finish in 1984. A constant fixture on invitational poker contests like the Poker Million, Flood earned over $1.1 million in live tournament cashes over the course of his career. Flood passed away on August 16, 2014 at the age of 71.

A number of smaller events will also be held over the weekend. Starting Sunday is the €335 ($365) Irish Open Mini, along with a Pot-Limit Omaha event and a €170 ($185) No Limit Hold’em Turbo tournament. On Saturday, there is a €225 ($245) Turbo “Win the Button” event; for those unfamiliar with the concept, that tournament awards the button to the player that wins the pot each hand, meaning there is no standard rotation and aggressive players who win many pots can compound their advantage by frequently acting last.

Even on Monday, as the tournament schedule is wrapping up, there will be one last event for players who stick around. The €175 ($190) No Limit Hold’em Scalps tournament is the final contest on the schedule, and offers a bounty format, with players earning €25 ($27) every time they eliminate a player.

The Irish Poker Open was first organized by Irish bookmaker Terry Rogers, and has remained one of Europe’s most important poker events ever since. In 2005, Paddy Power began sponsoring the tournament series, which led to an increase in field sizes that required the event to move out of the Merrion Casino and into major hotels in Dublin instead.