Announced via a press release on January 3, the latest incarnation of the Irish Poker Open will take place inside Dublin’s Citywest Hotel and feature a host of events. 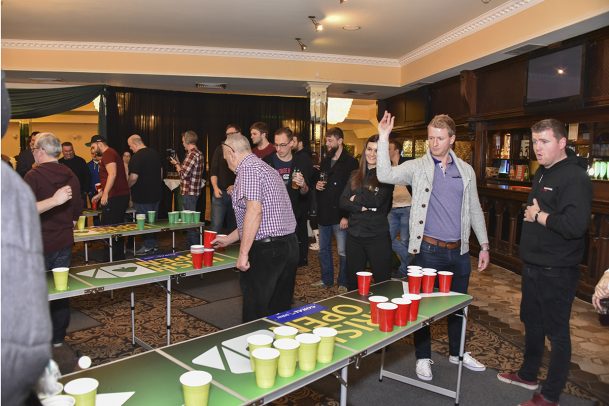 Topping the bill is the $1,200 main event, but visitors can also enjoy the “craic” across a range of side events between March 27 and April 4.

Among the usual mix of Hold’em and Omaha offerings, players will be able to test their skills in a variety of mixed games, including $158 Round of Each which will take place on March 31.

Fun On and Off the Felt

Beyond the betting action, the organizers of the 2017 Irish Open will also be providing some interesting off-the-felt activities.

Last year, an official Irish Open Beer Pong Championship was on hand to entertain the masses in between pints of Guinness and shots of whiskey. So far, this year’s frivolities are being kept under wraps, but in the spirit of the event it’s likely we’ll see some sort of entertainment for those in attendance.

In fact, since it was first played in 1981, the Irish Poker Open has not only developed a reputation for high quality poker, but fun.

Because the event’s founder, Terry Rogers, wanted to bring a Las Vegas-style event over to Europe, he wasn’t shy about adding some theatrics to proceedings.

American Showmanship Made Event a Hit

Having befriended the likes of Doyle Brunson and Amarillo Slim on a trip to Vegas in 1979, Rogers would often invite the top US players over to play and make them the stars of the show. According to the official history of the event, Rogers even gave Slim a white horse so he could ride out of Dublin airport and generate some buzz around the tournament.

In more recent years, sponsors such as Paddy Power have helped bring more online qualifiers into the mix, but there should still be a strong showing from the pros in 2017. In previous years the likes of Mike Sexton, Phil Laak and Doyle Brunson have all ante-up, but in 2016 it was rookie Dan Wilson who claimed the title.

After battling his way through 800 entrants, Wilson beat Michael Conaty heads-up to claim the $167,920 and the biggest win of his career so far. Wilson will be back to defend his title this year and the organizers will be hoping at least 800 players join the main event action between March 30 and April 3.