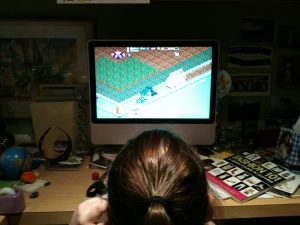 Internet gamers are less likely to suffer life-crippling addiction than regular gamblers, according to a new study by Oxford University’s Internet Institute.

For online poker players, who lie firmly in both camps, the jury’s out.

By “gaming” here, we really do mean gaming. We’re talking about players of online social games, video games, massive multi-player role-playing games, and everything in between.

We’re not talking about the euphemism the US casino industry has adopted to replace the word “gambling” because it has a softer edge (which, incidentally is pretty much the only soft edge you get in the US gambling industry).

We’re also talking about the first ever clinical study to examine a condition proposed by the American Psychiatric Association (APA) in 2013 and dubbed “Internet Gaming Disorder (IGD).”

Ultimately, IGD describes behaviors so problematic that they interfere with a player’s basic life functioning. The condition was proposed, but not diagnosed, by the APA, and designated a “condition for further study,” which we guess means it’s not an official thing yet.

We’ve all heard grisly stories of some kid in a far off country who died of Vitamin B deficiency after playing Farmville for 22 days straight, but aside from these strange, rare and isolated cases, how much of a problem, really, is IGD?

The Oxford study sought to determine, among other things, whether it actually exists, and its likely prevalence within the general population.

Many were skeptical about the APA’s declaration. The Huffington Post called it “muddled science” that used problematic diagnostic criteria that “pathologizes normal behavior.”

“If you stop crocheting in order to use methamphetamine, sure, very, very bad,” posited the Post. “To stop crocheting to play more video games? Less bad, maybe even good.

“Thinking about gaming when not gaming is another good example of a bad diagnostic criteria. Many people who are deeply into their hobbies… golf, SCUBA, extreme sports, etc., do exactly this,” it continued. “Why is it bad when it’s video games?”

Nevertheless, Oxford plowed on with its study using the same diagnostic criteria proposed by the APA. It surveyed 19,000 men and women from the US, UK, Canada and Germany, more than half of which said they had engaged in online gaming recently.

Two to three percent of those said they had at some point experienced five or more feelings defined as symptoms of IGD, which might qualify them as possible IGD “sufferers.”

The bad news is, the study’s pretty sure IGD exists. The good news is, even with the flimsy criteria, the prevalence of IGD in the general population was lower than that of problem gamblers. Moreover, it found, contrary to what was predicted, “no clear link between potential addiction and negative effects on health.”

“Importantly, the great majority of gamers, nearly three in four, reported no symptoms at all that we would link with addictive gaming behavior,” the study concluded.

Now, if you’ll excuse us, we’re off to Farmville for 22 hours straight.