A day before the New England Patriots defeated the Atlanta Falcons to win Super Bowl LI, Jordan Young was busy navigating a field of 695 entrants to win the inaugural MSPT Poker Bowl at the Venetian in Las Vegas. The tournament, which was designed to finish in time for players to enjoy the Big Game, came to an end when Young worked a deal with Ankush “Andy” Mandavia, who was running like a god. 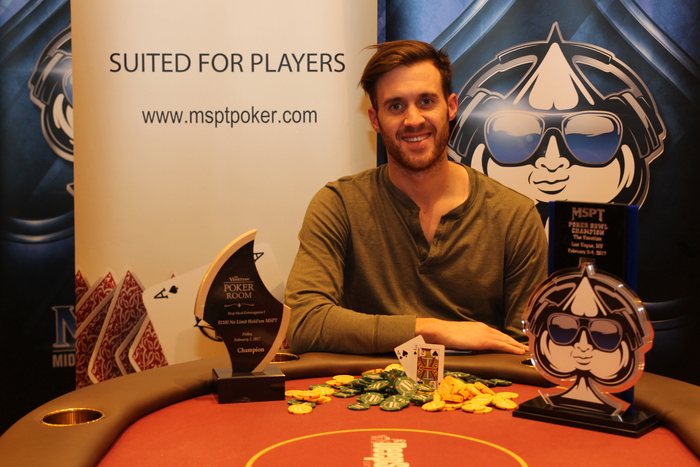 The win gave Young, who only had to fire one bullet in the tournament, the largest score of his career. Prior to this, his top cash was $54,936 for finishing ninth in a 2011 WSOP $1,500 No-Limit Hold’em event. The win pushed Young’s lifetime tournament earnings up to $461,921.

“I’ve had a little bit of a struggle playing deep, mainly at the World Series of Poker, so it feels good to finally close a big tournament out,” said Young after the win. “The structure was great. I love the 40-minute levels.

“My playing style is not suited all that much for the real long levels,” he continued. “I like to get it in there and just ram and jam. I loved the structure and I never had below the starting stack. Right away I had 80,000 and never looked back.”

Big Names Turn Out in Force

Among the notables to make the final table were WPT champ Jordan Cristos, as well as Mandavia. The former exited when his ace-seven was outdrawn by Young’s jack-six, and after Chris Moon fell in third, Mandavia and Young struck their deal.

Then, in the final hand of the tournament, Mandavia got it in preflop with king-ten only to be outdrawn by the jack-four suited of Young.

“Andy is just really good,” Young said of his opponent. “He’s really strong especially heads-up. My card distribution was solid heads-up, so it made it easier to play against him.”

Seeing as the Poker Bowl was just a day away from the New England Patriots taking on the Atlanta Falcons in Super Bowl LI, Young gave his prediction, despite the fact he is a Detroit Lions fan.

“I can’t really imagine betting against New England, but I’d like to see the Falcons beat them,” said Young. “New England is so easy to hate, but you have to respect how good they are.”

It seems Young’s read was spot on as the Patriots ended up making the biggest comeback in Super Bowl history to capture the Lombardi trophy in overtime, which was a first.