Illinois could be the next state in line to create a regulatory framework for legalized sports betting, after a lawmaker announced his intent to push for comprehensive gaming expansion that will look at sports betting, online poker, online casino games, and daily fantasy sports. 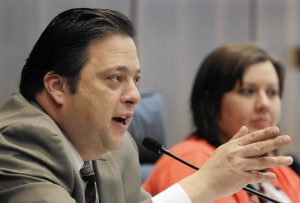 Bob Rita is backing a bill that would bring sports betting to Illinois. (Image: Chicago Tribune)

On Tuesday, State Rep. Bob Rita, head of the Illinois House subcommittee on Gaming, Sales, and Other Taxes since 2013, revealed plans to bring together two House committees in coming weeks to coordinate efforts for a major gaming expansion bill with economic opportunity initiatives.

The Democrat put out a press release announcing two upcoming meetings to help finally consensus among his colleagues for a new gaming bill will bring “tremendous opportunities to create revenue, jobs, and economic growth” in the state.

The first subcommittee hearing will be on Aug. 22, with a second taking place on Oct 3.

This isn’t the first time Rita has worked for expanded gaming regulations. In 2014, a bill aimed at legalizing some forms of online gambling failed to gain traction, while similar efforts in 2016 and 2017 also fell short.


While legislation related to gaming in Illinois has been a relative constant for decades, this new push marks the first time lawmakers will be looking at gaming laws and regulations since the US Supreme Court gave states the green light to legalize sports betting in May.

“The gaming landscape has changed significantly since I took on this issue five years ago,” Rita said, “and I want to use these hearings to understand how those changes present new opportunities for us to put the right package together as we look to meet budget needs and provide a spark for our economy.”

That proposal never mustered enough support to make it to a floor vote, however.


The budget in Illinois needs more than a spark. It needs a lifeline.

Unlike other states, which are looking at sports betting as a means of lining their coffers, Illinois would be considering an expansion to gaming as a means of averting an economic emergency.

In October, the Associated Press reported that Illinois is facing the worst financial crisis in the US — with the state owing some $16 billion in unpaid bills, and a budget deficit that is only growing. The state has the lowest credit rating in the country.

It’s not known exactly how much of a boost sports betting could give the state budget. However, we know that Nevada takes in an estimated $2.3 billion per year via legal sports betting. With Rita’s efforts moving forward, Illinois will likely soon have a better understanding of how much money they might expect from legal sports betting — and possibly online poker, too.

Jesus Christ I live in Illinois and do I feel embarrassed reading how badly managed and corrupt this state is. 10% additional state tax and for what?

Waiting for PokerStars to come to Illinois.

It’s positive that there are attempts to legalize sports betting in the US. Sports betting can be a major source of cash for the local governments and for the country as well. Hope to see this in action and the next step is to bring legal online poker in the US back as it was during the pre-Black Friday era.