Phil Hellmuth Struggles to Find WSOP Bracelet No. 15. Is the Poker Brat Past His Prime?

It was another swing and a miss for Phil Hellmuth in his quest for a 15th WSOP bracelet, but this time he can definitively blame bad luck, not what some consider to be his outdated poker strategy. 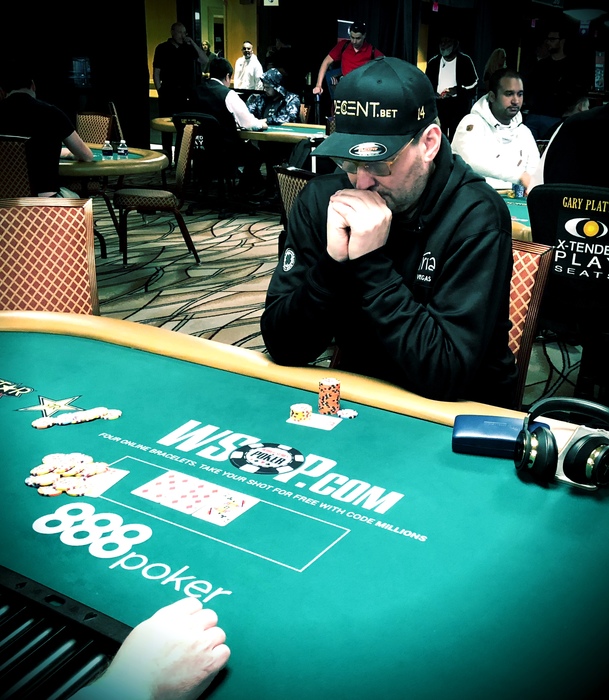 Phil Hellmuth continues to play an unconventional style of poker at the WSOP, which many consider to be outdated strategy. (Image: CardsChat News)

Had he been the last man standing at his 10-player table, the 14-time bracelet winner would have earned a spot at Thursday’s final table with a shot at ending his three-year WSOP bracelet drought.

But the poker gods seemed disinterested in allowing Hellmuth to extend his career bracelet record on this night.

In a shootout tournament, a player must defeat the entire table to advance to the next round. Phil, using his self-avowed “white magic” strategy, outlasted seven players at his table but found himself in a difficult position three-handed with a significant chip disadvantage against Alexander Lakhov, a talented Russian who has over $3.4 million in lifetime tournament earnings.

His other opponent, also with a small stack but still plenty of chips to make a run, was James Worth, a Canadian who hadn’t cashed in a tournament since 2009.

For Hellmuth to win the table and advance to Thursday’s final table, it seemed his toughest obstacle would be the aggressive chip leader, not Worth, who had a smaller stack and showed very little interest throughout the night in bluffing. But it didn’t play out that way.

Worth, whose play was heavily criticized at times by Twitch announcers David Tuchman and Kane Kalas, played what most would consider “ABC poker.” He had a wide folding range, often folding middle pair to one bet on the flop in a heads-up pot.

He rarely bet when he didn’t at least have a small pair and allowed his opponents to bluff him repeatedly, including Hellmuth who clearly picked up on Worth’s tight play.

Hellmuth Gets So Unlucky

So, how could the Poker Brat, one of the best tournament players in history, lose all his chips to such a passive opponent? He went 0-4 on pre-flop all-ins against Worth.

Hellmuth battled the entire night, waiting for an opportunity to make a run, but nearly every time he built up a decent chip stack, he would pick up a big pre-flop hand at the same time as Worth and double up his opponent.

In one hand, Hellmuth had AK and ran into Worth’s pocket aces. In another, he had pocket queens and lost a race against AK.

After more than five hours of grinding, Phil had more than half the chips in play. Within 10 minutes, he was eliminated thanks to losing a race (AK < 55) and a cooler (AQ < AK), both to his nemesis, Worth.

The Canadian spent most of the evening with a small stack and, every hour or so, he would double up against Hellmuth. To win all four all-ins, given that two were races and another a 70/30 situation, was almost an anomaly.

Unsurprisingly, with Hellmuth gone, Worth ended up losing his heads-up match to Lahkov, who advanced to the final table and will play for a chance to win up to $236,498 on Thursday

Has GTO Neutralized His Mojo?

Phil Hellmuth has more than $22 million in lifetime poker tournament earnings, was the 1989 WSOP Main Event champion, and has won more bracelets (14) than any player in history. No one else has more than 10. But many poker pros, including his Daniel Negreanu, argue his poker strategy, a psychology-based strategy which he’s dubbed “white magic,” is outdated.

On Wednesday, Hellmuth ran bad against Worth, a player he would be a huge favorite against heads-up. But the same can’t be said about how he’d fare against the top players in the game today.

Hellmuth’s recent tournament results are not impressive. He has $189,156 in cashes in 2018, which puts him well into the red considering he bought into the Super High Roller Bowl for $300,000 and has already entered at least 10 WSOP events to go along with a pair of $10,000 buy-in WPT tournaments and a $25,000 US Poker Open series event.

Last year, Hellmuth cashed for $1,133,312 in poker tournaments, and was in for over $400,000 between the Super High Roller Bowl and WSOP High Roller for One Drop, plus numerous other tournaments that likely equaled or exceeded his cashes.

Hellmuth’s strategy may have won him millions before younger pros began taking a game theory optimal (GTO) approach to poker. Hellmuth has disavowed needing to refresh his strategic mindset, but his results in recent years challenge his dismissal of GTO. Hellmuth hasn’t won a WSOP event since 2015 and, if he continues leading into pre-flop raisers on the flop and folding top pair to aggressive players, which he did multiple times last night, he won’t be winning number 15 any time soon.

These poor showings explain why Scott Seiver and other top pros have criticized Hellmuth for charging backers high markup.

So is the most successful player in the history of the WSOP he really worth the investment anymore? His results over the past few of years suggest not. And because he really did get unlucky on Wednesday, the poker world didn’t get to see him at another final table, where maybe we would’ve gotten another chance to wonder if it’s even more than that, if the game has passed him by.

We missed the most entertaining part of the hand analysis. For how many hours did he go on tilt after that crazy bad beats and coolers?? Did he said anything about Canadian players after busting or he really did changed as he said?

I think the times changed, and with all those gto players out there, the competition is getting tougher and its really hard for past poker pros to keep winning like they had done all these years. Its not only Hellmouth, its everybody who dont adjust to the new poker era.

I went to bed when they got to 3 handed. This is nuts. Grinding and grinding and getting all in preflop with the same guy 4 times and giving the double up each time. Seems like Phil was a tad unlucky. Phil doesn’t hold the bracelet record by luck or some out dated method of playing cards. He will continue to break his own records.