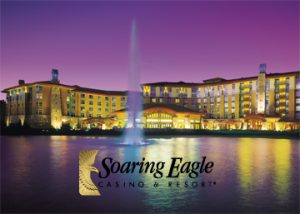 The Heartland Poker Tour’s (HPT) fondness for touring North America has increased exponentially over the course of ten seasons. Stop after stop, the tour brings poker enthusiasts and large audiences to treasured locations which are beamed out to televisions worldwide. Not one to break with tradition, the HPT is returning to one of its popular tour stops multiple times for Season X.

HPT will once again make a return trip to the Soaring Eagle Casino Resort in Mt. Pleasant, Michigan. However, rather than visiting the Soaring Eagle just once, HPT will make two 10-day stops at the casino. The first 10-day series starts on July 25, with the Main Event beginning on August 1. Running from November 14-23, Soaring Eagle will play host to HTP’s Championship Open.

“We are grateful to our Michigan partner for providing a great atmosphere for our players,” said HPT’s director of operations Jen Mastrud. “After their first visit to the property, players won’t miss another HPT event at Soaring Eagle.”

For avid fans of HPT and its most frequented stops, the Soaring Eagle Casino and Resort should be quite familiar. Since 2008, HPT has visited the location nine times. Found at the heart of Michigan, the casino has held the AAA Four-Diamond rating for 16 consecutive years.

Throughout those past nine visits at the Soaring Eagle, players participating in Main Events have generated prize pools that have exceeded three-quarters of a million dollars. Robert West, a Michigan native, scored a pay day of $234,410 when he bested a field of 545 entrants. The year before that, Ahmed Harajli of Dearboarn Heights won $176,865 along with his HPT title. 20-year-old Jordan Jayne won $165,462 for his time at Soaring Eagle.

Players hoping for equally profitable action in Michigan will have a lot to look forward to. For as little as $41, players can participate in several satellite opportunities to take part in HPT’s fun. As an interesting twist, the Main Event features a tournament structure that was designed by poker pro Daniel Negreanu exclusively for HPT.

HPT is currently wrapping up its stop at the Commerce Casino in Los Angeles, California. The recent announcement of the Soaring Eagle stop filled up a rather empty summer for HPT’s touring schedule. As of right now, there won’t be any stops rounding out May or through the entire month of June. Starting July 11, qualifying events and satellites will be run for the Soaring Eagle series.

After Soaring Eagle, HPT’s action picks back up on August 7 at the Ameristar Casino East Chicago in Indiana. Then Agua Caliente Casino Resort Spa in California, Golden Gates Casino Resort in Colorado and a return to the Commerce will come in the months ahead. Like many events throughout the season, episodes filmed at the Soaring Eagle will be syndicated throughout the world. Over 110 million homes in the United States will view the action along with distribution in Europe, the Caribbean, the Middle East, North Africa and Asia.

Wish I could go. I live right by the casino but just now getting into the live poker world and don’t have the bankroll. Can’t wait for future events though or if I get nice pay soon and maybe play a satty.