Leading up to the 2017 World Series of Poker Europe, which officially kicked off today, the WSOP International Circuit Rozvadov played out inside King’s Casino. 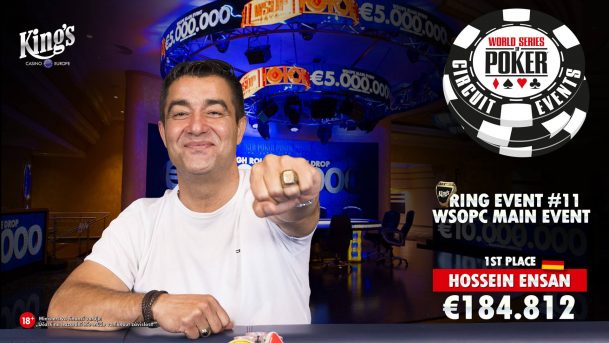 A dozen gold rings were awarded, including former EPT champ Hossein Ensan, who emerged victorious in the Main Event.

Hossein Ensan wound up taking an overwhelming chip lead into heads-up play against 28-year-old Jan Jobmann, and dispatched his opponent in two hands. In what would be the final hand of the tournament, Ensan limped the button holding the 8♦7♦ and Jobmann checked with his Q♦3♦.

The 10♦4♦2♣ flop gave both players a flush draw, and the chips went in. The 9♥ turn gave Ensan an open-ended straight draw, but it’d be the 8♠ on the river that would give him the win.

“I am happy to be here. That was four days with great players and it was tough. But now I am just very happy,” Ensan told tournament director Jack Effel after the win.

It’s worth noting that Ben Bensimhon, who recently did an exclusive interview with CardsChat about his WSOPC International Holland win, captured his second ring. He did so by topping a field of 763 entries, including well-known Brazilian pro Felipe Ramos in heads-up play, in Event #2: Monster Stack to win €69,550/$81,629.

Now that the WSOP International Circuit Rozvadov is complete, King’s Casino will play host to the 2017 World Series of Poker Europe, which kicked off Thursday with Day 1A of the €1,100 Monster Stack. It marks the first of 11 bracelet events.

In regards to the One Drop High Roller, 84 players have confirmed their participation including Gus Hansen, Bobby Baldwin, and power couple Igor Kurganov and Liv Boeree.

This marks the first time the WSOP Europe has been held at King’s Rozvadov after having previously been held Spielbank Berlin (2015), Casino Barriere (2013), and Casino at the Empire London (2010).

Earlier this year, the WSOP announced a partnership with King’s owner Leon Tsoukernik, who has come under fire as of late for not honoring his gambling debts. As part of the deal, King’s Casino Rozvadov will host the WSOP Europe in 2017 and 2019 with a minimum of 10 gold bracelet events each stop.