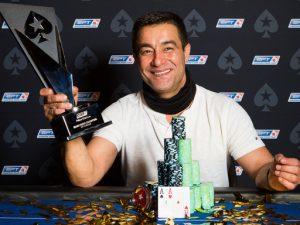 You could say Hossein Ensan is one of the breakthrough players of the year, an impressive feat since, at 51-year’s old, he is no spring chicken.

On Thursday night the German-Iranian won the EPT Prague Main Event in some style, outlasting 1,044 players, the second biggest field ever seen at the Prague stop of the tour.

Praising his victory on the PokerStars Blog, Brad Willis reminded us that no one had ever heard of Ensan until August 2014 when he won an EPT Senior’s event in Barcelona.

Investing part of his $6,000 winnings in a satellite to the main event there, he won a seat and promptly finished third for $860,000.

Despite only having played the game for two years, this week’s EPT final table was his third, and the $825,151 he won here takes his total to just over $2,000,000, an extraordinary haul, and proof that it’s never too late to try something new.

It wasn’t all plain sailing, though. Ensan began the final table second-last in chips and briefly went downhill from there.

Soon he was all in and racing for his tournament life, with A-Q against fellow short-stack Olivier Ferraro’s 5-5. A-Q connected with the flop, crippling Ferraro, who was knocked out shortly afterward.

A crowd favorite because of his wild, bluffy play, Ensan went from strength to strength from there, knocking out the next two players and vaulting himself into the chip-lead three-handed.

When Russian’s Gleb Tremzin knocked out erstwhile chip leader Ilkin Amirov of Azerbaijan, the scene was set for a final showdown.

Heads-up was an epic, with more hands played between the final two than at the rest of the entire final table.

After a five-hour-long war of attrition, Ensan finally had his opponent on the ropes, and picking up aces, he slowed-played them, and his opponent, to death.

This is My Prize!

“Thank you to the audience and all the poker players and I wish you a very good Christmas and a Happy New Year,” he added in German.

The next stop on the EPT will be the PCA, as the world’s best will descend on the somewhat warmer setting of Paradise Island in the Bahamas, from 8 to 13 February.