Filipino pro Mike Takayama won the Main Event of the 2017 Asian Poker Tour Championships Philippines on Thursday at the Resorts World Casino in Manila. He scored a $105,530 payday for the victory, which also marked his second time hoisting an APT championship trophy. 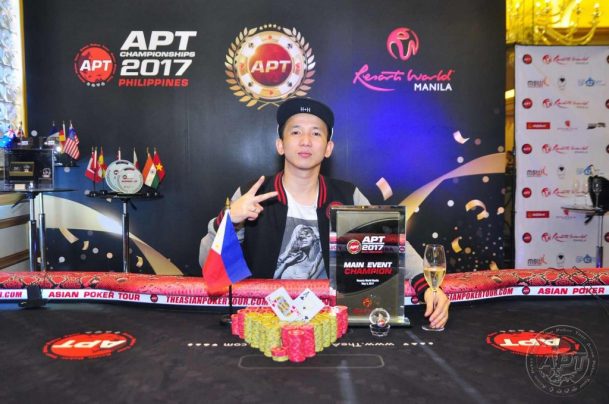 The victory assures Takayama’s place in the APT history books, as he became only the fourth player to win multiple APT titles. In 2014, Takayama won the same $1,100 main event, outlasting 356 players to win $79,041. This time around, the Filipino was the last man standing out of a record 422-player field.

The tournament would present a rocky road to the championship for Takayama. On Day Three, he started with a big stack but after being on the losing end of a few big hands soon found himself down to just a few chips and a chair. With 20 players remaining, Takayama had just five big blinds to his name. After a few double-ups, he’d eventually be all-in with A♣3♣ and needing something of a miracle against Ko Yuki-Yuki’s A♥K♦.

Two 3s on the flop would deliver, and that was enough to keep a Takayama heater going until he finished the day second in chips. Six eliminations later, he’d find himself heads -up for the title against Keith Seah.

As play began, Seah held a slight chip advantage. No big deal for Takayama, it seemed, until Seah began taking down pot after early pot to begin pulling away. But fortunes for Takayama would eventually turn when he held 10♥7♥, and spiked middle-pair with a backdoor flush draw on a J♠4♥7♦ flop.

His opponent held 6♦3♦, giving him a reasonable draw, but a 9♥ on the turn and 7♠ on the river rewarded Takayama with a big pot that changed the complexion of the tournament. A few hands later, Takayama would take down another sizable pot when his flopped trips held up against bottom pair.

It’s not easy to win a tournament without winning a few coin flips, and that’s what it eventually took for Takayama to seal his championship deal.

It was a relatively inevitable all-in pre-flop, as Takayama held A♣K♥ against Seah’s 6♥6♦. Both players anxiously awaited the first three community cards. When the flop splayed 10♦4♣K♣, Seah knew only a two-outer could save him.

But there would be no miracles, just an 8♦ on the turn and Q♥ on the river to give Takayama his second APT Championship victory, and send Seah home with a $60,020 in second-place prize money.