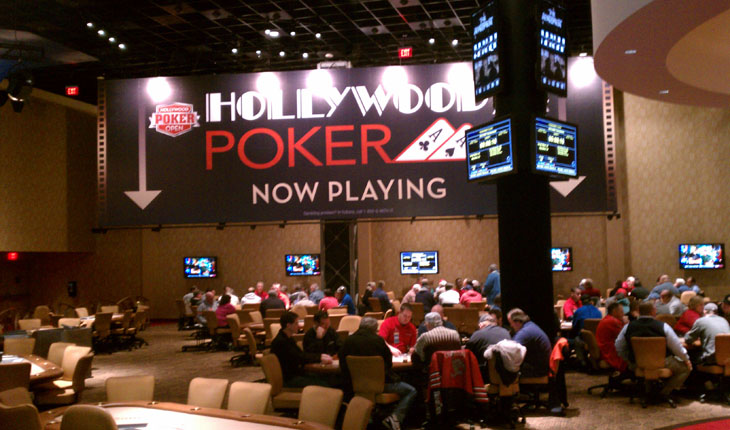 And now, the growing poker tour is back for Season Four, which recently kicked off at the Hollywood Casino in Lawrenceburg, Indiana.

Having a world champion as the face of the company has done wonders for a “new” poker organization that competes for attention against more established tournaments, such as the WSOP and WPT.

Season Four will stop at six locations around the United States, including a season-ending Championship Event in Las Vegas next summer.

“I think all the events are great, but if I had to pick just one it would be Columbus [Ohio]. It is traditionally the biggest stop and a great poker room to visit,” Moneymaker said of the tour stops in our recent exclusive interview with him.

And the man who turned poker on its heels in 2003 already has a cash at this year’s HPO, finishing fourth in event #1. Nice work for an ambassador, indeed.

Stammen, an accomplished poker player, won his second major event within a year’s time. In 2014, Stammen was the WPT Borgata Spring Poker Open champion, earning $1,350,000. He now has an impressive $4,507,189 in live tournament winnings.

Moneymaker didn’t have much success in Season Three. Despite traveling to each event as an ambassador, he only cashed in three side events the entire season, and had zero cashes in any of the Main Events.

But his lack of HPO Season Three success didn’’t leave him begging for cash on street corners. He still has more than $3.5 million in career earnings and all sorts of sponsorship deals.

Each season, the Hollywood Poker Open concludes during the summer with a Championship Event in Las Vegas.

Many might see this as strange, considering that’s the time when the World Series of Poker takes place. Being that HPO doesn’t have the established reputation of the WSOP, this strategy may seem questionable, but the HPO’s turnout each year has been impressive.

Perhaps hosting the Championship Event in the same city at the same time as the most legendary poker series in the world is the main reason for HPO’s success.

Thousands of poker players flock to Sin City over the summer to play cards. Having so many poker aficionados in at the same time obviously works to HPO’s advantage.

Instead of seeing it as competition, HPO sees it as opportunity.