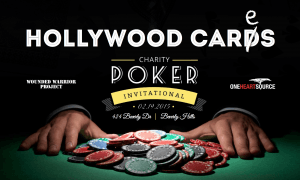 Hollywood Cares Charity Poker Invitational host Phil Hellmuth isn’t going to be the only big-name celebrity in the building when the event goes down February 19th in Beverly Hills.

“Breaking Bad” star Dean Norris and Kim Coates from “Sons of Anarchy” have been confirmed as co-hosts for the evening, along with reality star and television emcee Chris Harrison who will assist Hellmuth.

Proceeds from the event will benefit the Wounded Warrior Project and One Heart Source.

Buy-in packages range from $500 for 2,000 chips all the way up to $2,500, the “High Roller Stack” that gives the entrant 15,000 chips. Additionally, rebuys and add-ons will be offered to keep players in the game, and the money for charity increasing.

Although players won’t be competing for a large cash reward, several exceptional prizes and raffles will be handed out including a World Series of Poker Main Event entry.

Phil Hellmuth needs little introduction to poker fans. The 13-time WSOP champ has won over $18 million in live tournament earnings, and holds the record for the most WSOP cashes and final tables. But what many don’t know is that as good of a poker play Phil is, he’s an even better humanitarian. Through his charity events, Hellmuth has raised over $20 million for philanthropic organizations. “I want to be the greatest poker player of all-time. But one who always puts family first,” Hellmuth says.

Chris Harrison will host the event along with Hellmuth, a seasoned pro who has emceed The Miss America Pageant, Emmys and American Music Awards red carpets, and TV Guide’s red carpet programming. Harrison rose to fame by presenting all 19 seasons of “The Bachelor” and its spin-off “The Bachelorette.”

Rising to fame as Tig Trager in the FX series “Sons of Anarchy,” Kim Coates has over 115 film and television credits including critically acclaimed films “Pearl Harbor” and “Black Hawk Down.” On the small screen, he’s appeared on such shows at “Entourage” and “Prison Break.”

Most fans know him as Walter White’s brother-in-law and DEA agent Hank Schrader from the AMC series “Breaking Bad,” but Dean Norris’ resume includes more than 120 movies and TV programs. From “Evan Almighty” to “Little Miss Sunshine,” Norris has enjoyed an illustrious career. He currently stars on the CBS drama “Under the Dome.”

All for a Good Cause

Poker has made many people rich, and of course just as many poor. However, the Hollywood Cares Invitational is all about enriching the lives of those in need, and the tournament couldn’t have chosen two more worthy causes.

The Wounded Warrior Project is a veterans service organization whose mission is to “honor and empower” those who served in the United States Armed Forces and were critically injured. The group assists service members in a variety of ways, from aiding in their medical care to providing unique programs to rebuild the body and mind.

One Heart Source is a volunteer-led humanitarian organization whose goal is to empower children living in poverty with education.

Volunteers spend their time assisting the needy in Tanzania, South Africa, and Jamaica, all areas prone to poor living conditions, disease, and illiteracy.

Through education, One Heart Source believes those living in these regions can overcome their geographical obstacles.

say what you will about Hellmuth, but that man does some great work for charity. And Norris? Anybody remember him as a mutant on mars in Total Recall? Come on now, that was classic!

Charity – one of the best manifestations of activity of people. Undoubtedly – such people as Phil Hellmuth, Chris Harrison, Kim Coates and many others – are estimable also the aspirations to be similar to them.