Phil Hellmuth will step away from his courtside seats at Golden State Warriors home games to compete in three season-ending episodes of Poker After Dark next week in Las Vegas on PokerGO, a subscription-based poker app. The December 19-21 shows are being dubbed Holidays with Hellmuth. 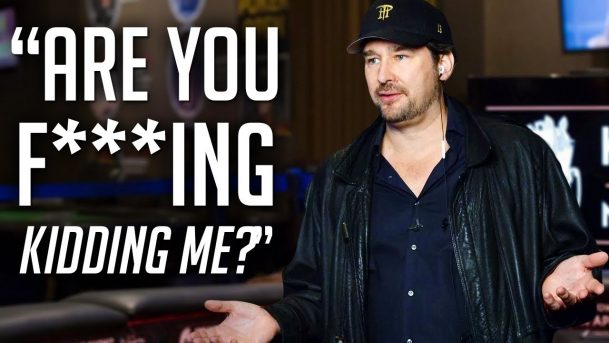 Phil Hellmuth will be featured on the season-ending episodes of Poker After Dark next week, and audiences can expect some colorful Phil-isms . (Image: YouTube)

Emmett and Shak will return on Wednesday to battle in a high-stakes cash game, along with Hellmuth, and will be joined by David “Doc” Sands, Avi Freedman, Rick Thompson, and Zach Hyman. Thursday’s finale will feature Hellmuth, Joe Marchese, Dave Penski, Maria Ho, Daniel Negreanu, and Antonio Esfandiari.

Before Poker After Dark ceased to exist following the 2011 season, Hellmuth was a regular competitor. But, surprisingly, he hasn’t yet made an appearance on the reboot season, which began in August.

The Poker Brat verified his moniker numerous times on Poker After Dark, often melting down over a bad beat or complaining on his way out the door.

In a 2010 hand against Tom “durrrr” Dwan, Phil was on the losing end of a rivered two-outer. Dwan, holding pocket 6’s, hit his set on the river to crack Hellmuth’s pocket 7’s.

After tanking for five minutes, he eventually made the correct decision to lay his hand down. Dwan showed his cards, and a frustrated Hellmuth couldn’t believe he had just lost to “another f*cking two-outer.”

When Hellmuth loses a pot on Poker After Dark next week, you can rest assured he will handle it with the same amount of professionalism as President Donald Trump does when criticized.

All Good Things Must Come to an End

Poker Central hasn’t yet announced if Poker After Dark will return for another season in 2018. But the 2017 slate will conclude on Thursday.

The reboot season features some of the highest stakes cash games in the show’s history and many of the same past PAD regulars, including Daniel Negreanu, Tom Dwan, and Phil Galfond.

The season began with the return of Dwan, one of the games most popular stars who has been absent from the limelight the past couple of years. Tom didn’t miss a beat, catching many big hands, including winning a $750,000 pot against Antonio Esfandiari, just like he did frequently back in the day on the old PAD.

New-school players such as Jason Koon and Doug Polk made their Poker After Dark debuted this past season.

a temperamental player, I still remember how he upset his bass in this show when he lost his hand and dropped off :), almost to start banging on the show :), I think that this time there will be interesting fights.

As a result, the poker player, whose name was called the pre-New Year series Poker After Dark won more than $150,000. So the weekend at the poker player was very successful.