What the Hellmuth: Phil Dresses as Giant Baby on TV 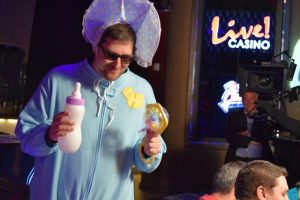 Phil Hellmuth dressed up as a huge baby in a recent TV poker show, but why? (Image: poker-magazin.at)

Phil Hellmuth has made crazy poker tournament entrances in the past: memorable getups include stints as Julius Caesar, a pro wrestler, a boxer and as a World War II general. So where do you go from there to get people talking about you?

Apparently, to your crib, and we don’t mean the cool kind that rock stars share with us on VH1. Nope, Hellmuth’s latest costume-du-jour was that of a genuine, bona-fide baby: an outfit some players might even say was apt.

“I am dressed up as a baby on the set of ‘Poker Night in America!’ W a onesie, a bonnet, a bottle & a rattle,” explained Phil Hellmuth matter-of-factly on Twitter this week, as though it was the most normal thing in the world.

But this was not normal, it was the stuff of nightmares, and the Twittersphere reeled in alarm demanding an explanation. Had he finally snapped? Or maybe this is how he dresses in private and he simply forgot to get changed that morning?

Sure, we all know Phil likes dressing up, but we’re used to rather his more self-aggrandizing themes, like the time he turned up to the WSOP dressed as Caesar flanked by Amazon warriors, or the time he arrived driving a jeep disguised as General Patton. Then there was the year he decided to be a racing driver and managed to crash his car in the Rio Casino’s parking lot.

We’re used to those carefully stage-managed, limelight-stealing entrances at the beginning of each WSOP, and we await them with increasing indifference, but a baby costume seems a tad over-the-top, even for the unpredictable Hellmuth. While he may have been accused of being a big baby a few times in his career, this was a something of a departure, and we could only assume that he had lost a pretty serious bet.

Sure enough, details soon began to emerge that the Poker Brat had indeed fallen foul of a wager, the benefactor of which was 888-sponsored poker pro Jessica Dawley. During a warm-up Sit-n-Go before the recording of the “Poker Night in America” show, the two players decided to engage in a last-longer bet, with Hellmuth expressing a desire to see Dawley “in a toga” if she lost. However, Hellmuth was first to bust and arrangements were quickly made to procure a giant baby costume in time for filming.

There Goes My Baby

“It worked out perfectly,” said Dawley. “He was a great sport about the whole thing, the best. I couldn’t believe he actually went through with it.”

Hellmuth is merely carrying on the fine tradition of poker players being made to look ridiculous having lost prop bets. Joe Sebok, for example, played the entire 2006 WSOP Main Event dressed as Batman’s sidekick Robin after losing a last-longer to Gavin Smith. We’ve also witnessed Vanessa Rousso dressed as a cockroach, Tatiana Pasalic dressed as a tiger (grrr!), Joe Sebok (again) dressed as a bear, and Shaun Deeb in drag (not pretty).

Of course, Hellmuth’s saving grace has always been his ability to laugh at himself, and he’s clearly a good sport. Or, as Doyle Brunson tweeted: “I guess Phil is completely nuts. How much would Ivey take to wear that get up?”

The undoubtedly memorable show will air in a few months.