Hashtag King (better known to his family as Salomon Ponte) probably didn’t make any friends during the latest Poker Night in America cash game on Saturday evening. But then again, he doesn’t play to make friends. He plays the game to make money. 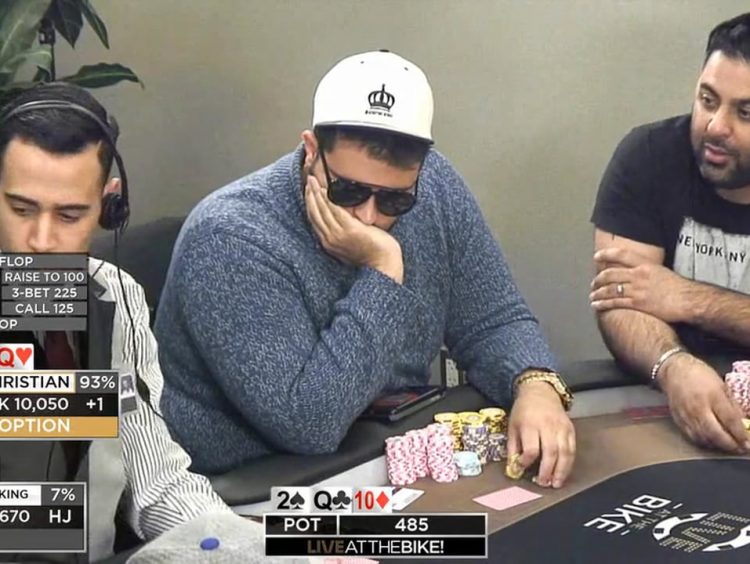 Hashtag King, aka Salomon Ponte (seen here at a Live at the Bike segment) wants to play Doug Polk for $1 million, but won’t agree on a time or date. (Image: liveatthebike.com)

He didn’t do that either, however. Not this time.

But the high-stakes gambler did challenge Doug Polk to a heads-up match. The offer was accepted, but Ponte refused to commit to a date.

Polk, one of the most accomplished online heads-up players of all-time, suggested the two play for a cool million in the fall. But he wanted Hashtag King to put $50,000 into escrow to ensure he gets some money if his opponent doesn’t show up to play. Hashtag King was not on board with that option.

Ponte did, however, offer to play him on May 1 on Live at the Bike in Los Angeles. The two had previously agreed to “play in the fall,” but haven’t set a concrete date. Polk, when asked why he won’t play soon said, “because I already have a schedule.”

The two didn’t come to an agreement on a time, or on what the stakes would be for the match, partially due to Ponte’s refusal to allow Polk to get a word in edgewise. He continually talked over him, but didn’t make a commitment.

Hashtag King talked a big game in the $25/$50 no-limit hold’em cash game at Choctaw Casino in Durant, Oklahoma during the livestreamed show. The drama-filled evening was aired live on Twitch. It will be edited for a future Poker Night in America showing on CBS Sports Network.

Ponte spent much of his two-hour session berating other players, referring to them as “birds,” along with some other choice words we can’t repeat. Polk wasn’t the only one receiving the brunt of the self-proclaimed King’s foul mouth.

Shaun Deeb, another internet poker legend, was repeatedly insulted by the man who calls himself the “best player in the world.” Hashtag King got personal and, perhaps, crossed the line.

He called Deeb “hideous” and “fat.” And referred to both his wife and his sister as “ugly.” But karma can be a royal pain in the butt at the poker table sometimes. After letting everyone know how skilled he is at poker for two nonstop hours, Ponte had a tough decision to make on the river with top pair. Deeb put him all-in with two pair.

Hashtag King tanked for a couple of minutes before making the call. And, just like that, there was peace at the table.

Who the Heck is This Guy, Anyway?

Ponte’s claim to poker fame came in January 2016, when he won a WPT Deepstacks event in Hollywood, Florida  for $344,420. He only has a few other small cashes on his tournament resume, however.

But it wasn’t until recently that he made a name for himself. Ponte has been active on social media the past few months, promoting his own “Hashtag King” gear. He sported six hats and a plethora of poker chips showcasing his gold crown logo throughout the PNIA Twitchcast.

For the time being, he’ll have to stick to Snapchat and YouTube to promote his products. For reasons unknown to us, his Twitter account has been suspended.

In recent weeks, he’s appeared on both Poker Night in America and Live at the Bike. He’s been a hot topic on Poker Twitter recently, as well. But he has yet to prove his ongoing poker skills. He may get the opportunity to do so in the fall against Doug Polk.

But he has to pick a date, and show up, first.