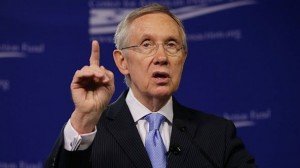 “We don’t do politics,” claims Harry Reid, denying rumors that he had formed a pact with Sheldon Adelson to introduce RAWA in the omnibus spending bill. (Image: cnsnews.com)

Senator Harry Reid of Nevada believes that Congress will renew efforts to prohibit online gaming and “get rid of the Wire Act” next year, while carving out an exception for online poker.

The incumbent Senate Majority Leader, who is a former chairman of the Nevada Gaming Commission, has long supported the idea of legalizing online poker, while outlawing almost all other forms of Internet gambling. In 2012, Reid prepared legislation to that effect, dubbed the Reid/Kyle Bill, but he failed to push it through.

Industry observers had feared that there would be an attempt to pass an online gambling ban during the lame duck session of Congress, and rumors were rife on Capitol Hill of a political alliance between Reid and Las Vegas Sands Chairman Sheldon Adelson.

Fears were that the old friendship between the two might include a joint push of the Restoration of America’s Wire Act (RAWA), legislation that proposes to ban online gambling, in the 1,600-page must-pass omnibus spending bill.

However, while Reid stated recently that no such legislation would be forthcoming during the lame duck session, he says he fully expects a new push for a federal ban in 2015, as he told the Las Vegas Review-Journal this week.

Up in the Sky

“I think there will be efforts made to look at the Wire Act in a Republican-initiated Congress, yes I do,” he said. “I think there will be efforts made to get rid of the Wire Act … I think the proliferation of gambling on the Internet is not good for our country. I think it is an invitation to crime. I think it is hard to control for crime when you’ve got brick-and-mortar places, let alone something up in the sky someplace, and it is very bad for children.”

“If there is a chance to (legalize) poker, I will do that, but I am not for the Wire Act,” he added.

Reid was, however, quick to deny the rumors that he and Adelson had a “gentleman’s agreement” that involved Reid forcing RAWA through should the die-hard Republican donor help him get re-elected in 2016. While the two men are friends, say the senator, their political differences are too pronounced for any such alliance.

“Sheldon Adelson and I have been friends for a long time but on politics he and I don’t agree, so we don’t do politics. I’m glad he joined my position (on Internet gambling), but no, there was nothing,” he said.

Poker Only “Not Sustainable”

While organization lobbying for the interests of American poker players, the Poker Players Alliance (PPA), once fully supported Senator Reid’s crusade to establish a carve-out, it has since revised its position, stating recently that it would oppose any such legislation.

“We as a poker community need to recognize that the success of poker often is built on other forms of gaming,” said PPA Executive Director John Pappas. “If you cut off all other games in the US market, investment and interest would shrink considerably. We’re going to fight tooth and nail to protect the interests of poker players, but poker-only in the US might not be a sustainable model to benefit players, long term.”

Could not care less about casino games…..Poker only if made legal country wide is definitely sustainable…..That’s been proven by the 2 poker only sites in that that little state of Nevada….Expand that by 50 states and there will be money to be made……Not as much as the casinos want……But as a poker player I could care less about the casinos…..And oh worldwide poker would definitely be profitable as well.

Played Poker for years as entertainment with a chance tk win a little money. Never once played any online casino games nor did anyone i know. That argument should not be used by poker players. We just want poker.