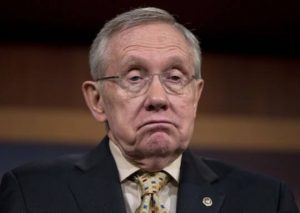 Harry Reid may have finally abandoned his quest to legalize online poker, as he enters the final months of his career.

After three decades in politics, Reid recently announced his decision not to seek reelection in 2016.

Speaking, to the Las Vegas Sun this week, the Senate Minority leader, who supports a ban on online gambling but has spent five years on and off campaigning for a federal online poker carve-out, sounded like he was finally admitting defeat.

Many feel that the Senator’s efforts on behalf of online poker were half-hearted in the first place.

There were rumors in 2010 that Reid would try to push an online poker bill through the lame duck session that year, but it didn’t happen.

In 2012 he was promising Nevada’s gambling industry that a federal bill to legalize Internet poker would be passed by the end of 2012. It might be “the most important issue facing Nevada since [the nuclear waste dump] at Yucca Mountain,” he said. “This bill means jobs for Nevada.”

Reid teamed up with Senator Jon Kyl, a fierce opponent of online gaming, in order to prepare legislation that would legalize online poker and horserace betting while banning all other forms of online gambling at a federal level, but the bill was never formally introduced.

Reid blamed Nevada’s Republican Senator, Dean Heller, for failing to whip up enough GOP support for the bill, and vowed he would try again next year.

At Odds With Casino Industry

Meanwhile, he remains steadfastly opposed to online gambling in general, he says, a position now at odds with the vast majority of the Nevada casino industry, whose interests he has represented for decades.

“I think the proliferation of gambling on the Internet is not good for our country,” he said. “I think it is an invitation to crime. I think it is hard to control for crime when you’ve got brick-and-mortar places, let alone something up in the sky someplace, and it is very bad for children.”

Characterizing Reid’s position on internet poker as a ‘quest’ is absurd. His ‘support’ of the issue has been tepid at best. Remember, the so called “Reid-Kyl” bill never even got introduced, whenever Reid was asked about it all he would say is “ask the Republicans” and then when it appeared that Sen. Heller had the GOP votes in hand, Reid withdrew the proposal.

No, this is just more typical Reid. All politics, no action.

I would guess that Reid has too much to gain , financially and personally, from the established live-play casinos once he is not in office.

He was a b***hole in office, he’ll be no different once he is only beholding to Nevada casinos and interests.