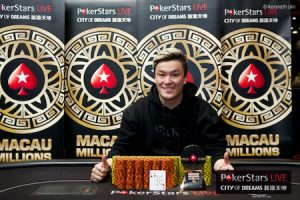 On March 8, the PokerStars-sponsored 2014 Macau Millions Main Event kicked off with the first of a whopping six Day 1 events. The HK $2,200 buy-in event – which translates to a modest $290 USD – saw many entrants, surpassing a previous record for a PokerStars event in Asia. On March 14, on Day 1E of the Main Event, the record was pushed from 270 all the way to 457 players, making it the best-attended Asian poker tournament under the PokerStars umbrella. In the end, it was Hao Chen of China who took home the title and a HK $550,000 ($70,814 USD) first-place prize.

The PokerStars LIVE Macau poker room kicked off Day 1A amidst a lot of fanfare, with many expecting it to become the biggest tournament in Asia, breaking the previous record of 1,329 entries. With 134 entries on the day, play continued until the top 7 percent remained, meaning only 10 players advanced. Norway’s Mikal Blomlie led the way at the end of this first Day 1 with 233,000 chips. Notable advancing players were APPT Macau Champion Alexandre Chieng and 2013 ANZ Player of the Year, Iori Yogo.

Day 1B showed more entrants with 157 grinders entering, with Hong Kong’s own Justin Chan second in the field after the day’s play was completed with 211,500 chips. Chan was feeling the luck continue from four years ago, as he is a returning champion. Leading the way was Singapore’s Tai Tan, who held the overall chip lead with 364,500 chips.

On the next day, 139 entrants came into the field to participate in Day 1C, bringing the three-day total to 430 entrants. Lorie Lagrosas, the PokerStars LIVE Macau operations manager, said that the big fields always come in the last two or three days, meaning the company was confident they would indeed break the record. When play concluded, Russia’s Svyatoslav Dvornikov led the way with 219,500 chips. Strangely enough, one of the survivors from Day 1A, Alexandre Chieng, played in Day 1C and also lasted the field. Under the rules, he was allowed to keep his larger stack for play on Day 2, and cashed out his smaller stack from Day 1C for a HK $11,000 payout.

A good number of people showed up for the second-to-last of the Day 1 events. A total of 335 players entered, breaking the previous high of 270 players which was set in 2011. Team PokerStars Pro Vivian Im was able to survive the field to get into Day 2 with the second largest stack at 294,000 chips. China’s Zhaojun Ruan led the field with 328,000 chips. Jack Lee became the second player in the tournament, along with the aforementioned Chieng, to double-qualify for Day 2.

The record for number of players entering into a Day 1 tournament in Asia lasted 24 hours. On Day 1E a whopping 457 players entered, which also meant that the overall record was sure to fall on the final Day 1 event. Red Dragon winners Kenny Leong and Terry Fan were two of Day 1E’s biggest stacks and advanced along with Team Pokerstars Pro Bryan Huang. Percy Yung became the third person to double-qualify for Day 2 under the unique format.

The overall record was shattered on Day 1E as the total number of entries swelled to 1,804. The prize pool was set at HK $3,499,760, which is nearly HK $1.5 million more than the previous record. With 582 entries, there were 41 survivors who lasted to Day 2, including China’s Hao Tian and PokerStars LIVE qualifiers Ka Cheong Wong and Dennis Kow. Two Team PokerStars Pros – Bryan Huang and Vivian Im – also qualified for the second time for Day 2 and took payouts.

Day 2 Down to the Final Table

The tournament that had started eight days prior with 1,804 entrants whittled down to the final 10 in less than eight hours. Day 2 started with 121 players and played down to the final table, with China’s Hao Chen and Sheng Chang nearly identically leading the pack with 2.9 million and 2.855 million in chips respectively. In third place was Hong Kong’s Kenny Leong, who held 2.7 million and was considered a favorite to win, considering his Red Dragon title. All players at the final table were guaranteed to take home at least HK $8,000 ($1,030 USD) in winnings.

The action was fast-paced at the final table, and it only took 3 1/2 hours to crown a champion as eliminations were fast and furious. Short stacks took each other out quickly, with Chen taking advantage at every turn and amassing half the table’s chips by the 6th place elimination.

Chen was able to eliminate the former Red Dragon winner, Ken Leong, in third place, gaining a massive chip advantage going into heads-up play. To his credit, Sheng Chang played tough and eventually doubled up to climb nearly even in chips at one point. That success was short-lived, as only a few minutes later Chang was all-in with two pair and ran into Chen’s made straight, which held up.

Chen now can boast that he has won the biggest poker tournament ever held in Asia, along with the HK $550,000 first-place prize that goes with it. Chen stated that he is ready to keep playing, with his eye on the upcoming APPT Seoul event after he’s done celebrating this victory.