Online gaming operator GVC has received approval to operate in New Jersey. The new owner of bwin.party has been sweating the vetting process in the Garden State since it was hastily forced to apply for a license in February, following its $1.6 billion takeover of bwin.party. 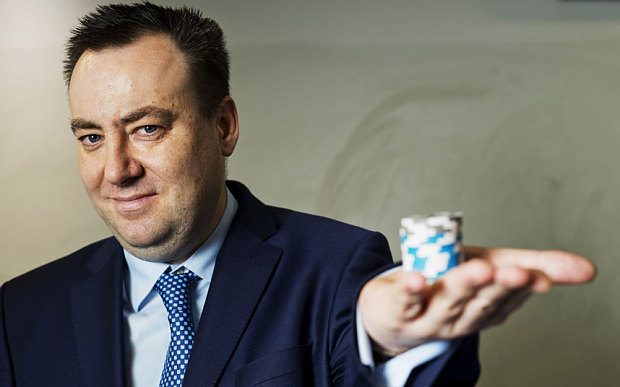 After previously downplaying the importance of a New Jersey gaming license for GVC’s success, CEO Kenny Alexander may be singing “God Bless America” now that he’s been granted one by the NJDGE. (Image: David Rose/Telegraph Media Group)

Bwin offers online poker and casino gaming to New Jersey residents in partnership with the Borgata, which meant it was necessary for GVC to petition the New Jersey Division of Gaming Enforcement (DGE) for a temporary license while its full application was being considered.

GVC’s engagement with numerous so-called “gray markets” around the world (meaning that the legalities of online gambling in these regions are murky at best) meant that licensing was by no means assured. The DGE decision this week offered an interesting insight into the regulator’s stance on those who have interacted with these debatable markets.

Within weeks of the takeover being finalized, GVC had reintroduced Party Poker to 21 gray markets around Europe and the Americas, many of which bwin.party had previously withdrawn from in 2013 as it initially sought a New Jersey license.

While there has been no official announcement by the regulator explaining its decision, GVC made the following statement via a press release on Monday:

“As part of its preliminary investigation, [the] DGE examined GVC’s business operations and concluded, ‘GVC and its individual qualifiers possess the requisite good character, honesty, and integrity should it file for a transactional waiver.’ DGE determined that the New Jersey licenses held by bwin.party shall remain valid under GVC’s ownership and a transactional waiver is not needed in connection with existing New Jersey contracts.”

Atlantic City’s Borgata casino was sufficiently concerned, however, to seek out a Plan B should the GVC license have failed to pass muster. Eyebrows were raised in February when casino gaming software provider GAN, which provides free-to-play social gaming for Borgata, announced that it had extended its play-money deal to offer real-money gaming for the casino.

Then eGaming Review reported that Borgata had sought out the services of Jim Ryan’s Pala Interactive to provide an online poker platform, just in case GVC’s activities proved to be too gray for the DGE’s liking.

This led to rumors that the relationship between GVC and Borgata had broken down, an assertion hotly denied by GVC. But the latter’s apparent ambivalence towards the New Jersey market did nothing to quash these rumors.

While GVC chief Kenny Alexander had said he hoped to receive a license, because it would give the company “optionality” in the US, he’d also recently told Gambling Insider that the US was “not a big part of our overall strategy,” leading to the potential for appearing to be thumbing its nose at the New Jersey regulator.

With MGM now a 50 percent stakeholder at the Borgata following its recent deal with the upscale property, the GVC relationship is likely to remain in place, for now. Any further disruption at a time when new entrant PokerStars has usurped Party-Borgata from the leading position in the market could prove costly.