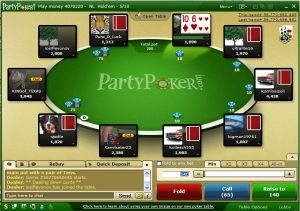 PartyPoker, once the biggest online poker site in the world, was a thorn in bwin’s side, but GVC appears to have injected new life into the brand. (PartyPoker.com)

Could PartyPoker be making a comeback? The once-mighty online poker giant, which a decade ago was the biggest online poker site in the world and floated on the London Stock Exchange for $4.64 billion, experienced year on year growth for the first time in five years in the first quarter of 2016.

The revelation comes from the publication of new owner GVC’s preliminary results for 2015, which includes a preview of the company’s Q1 performance. The preview does not report any firm figures on the revenue growth of PartyPoker, although in an interview with Gambling Insider, GVC chief Kenny Alexander said that, collectively, the brands acquired from bwin.party had enjoyed 11 percent growth in the first quarter.

“PartyPoker, which has been well publicized as having fallen off a cliff over the last four or five years and has been the Achilles’ heel for the previous management,” said Alexander. “We’ve managed to return it to quarterly growth for the first time in five years,”

Bwin.party’s poker operations had indeed become a thorn in its side. In 2014 its poker revenues across all markets dropped by 29 percent, year on year, the company reported last year, which contributed to a net loss of €94.3 million ($108 million) across all operations.

Bwin merged with party in 2011 and quickly became bogged down with a tougher-than-expected integration at a time when competitors were shoring up their digital and mobile offerings.

The newly formed bwin.party focused on its core business, the European sports betting market, while Party Poker, which had never quite recovered from pulling out of the US market after the passage of UIGEA, largely took a back seat. As the online market constricted, so did Party.

According to Alexander, Party’s recent turnaround had been largely due to an increase in marketing and promotional activities. It also recently and belatedly introduced jackpot sit n go’s and overhauled its tournament schedule, while signing on new brand ambassadors, like boxer Carl Froch.

GVC also reintroduced the poker site into 21 gray markets around Europe and the Americas, from which bwin.party had withdrawn in 2013.

“There is some new management in place and a new head that’s running it,” said Alexander. “I think the main thing though is that the gaming brands within bwin.party are getting a lot more focus and attention than they have been given historically. I think it’s fair to say that the bwin sportsbook business got a lot of the attention, priority and focus pre-acquisition.

“I must admit,” he added, “when we acquired bwin.party, we said we would try to stabilize it. If somebody had said we could actually grow PartyPoker to the extent we have done in the first quarter, I would have been quite surprised. It’s a good start.”