GVC Holdings has shown its financial might ahead of a proposed takeover of Ladbrokes Coral thanks to recent annual sales figures surpassing €1 billion ($1.2 billion). 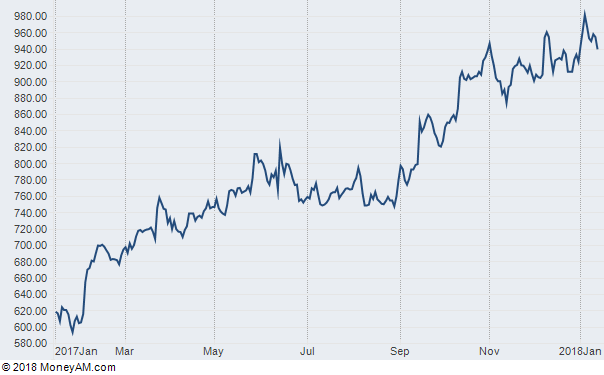 Partypoker’s parent company is reaching new heights as a force in gaming, with its 2017 stock price reflecting a strong year across casino, poker, and sports betting sectors. (Image: Telegraph.co.uk)

With an offer of up to $5.33 billion on the table, GVC has given Ladbrokes Coral and its own shareholders something to think about after publishing its 2017 earnings report. Following a successful year of trading, the online betting and gaming company reported 2017 sales figures 13 percent higher than the previous year.

GVC is the Isle of Man-based parent company of Partypoker. They also own and operates four online sports books across Europe, including Bwin and Sportingbet.

“All verticals put in a solid performance,” a Jan. 11 press release accompanying the financial report said, “with Partypoker maintaining its impressive growth.”

GVC’s revenue report will serve as something of an advert for the power of its brand. At present, shareholders at GVC are considering a proposal to take over Ladbrokes Coral.

Should the shareholders vote in favor of the acquisition, GVC would formally offer Ladbrokes Coral a deal with two potential payments based on the outcome of the UK government’s FOBT review.

Merger in the Balance

For GVC CEO Kenneth Alexander, the deal would be a chance for all involved to become a major player on the global internet gaming stage.

“We have once again demonstrated our ability to integrate significant acquisitions, realize material synergies and at the same time deliver top line growth,” Alexander noted in annual report. “The recommended transaction with Ladbrokes Coral Group presents an exciting opportunity for both sets of shareholders, creating a global gaming group.”

So far, GVC’s board has put itself in a strong position should its shareholders agree to the proposed takeover. With the 2016 takeover of Bwin.party showing that such deals can be profitable, the chances of another takeover being approved look positive.

If and when this happens, it will be for Ladbrokes Coral to hash out the details before ultimately signing on the dotted line to cement another major merger in the industry.

Good news for all of us poker players with the GVC doing well. The fact that they are following a more player centric business model and is succeeding is extremely good news. I hope they have continued success in taking this approach.

For me, as a Bulgarian, the imminent merger of Party and Ladbrokes raises my hopes that players from my country will be re-admitted to Ladbrokes and their betting platform.

As regards poker, I’d like to play again in Ladbrokes poker, but I really don’t know what the top managers of Party will decide after the merger – will they keep Ladbrokes poker or will they just merge their player pool into the one of Party.