GVC Expects NJ Licensing Decision within Months, but is It Too “Gray” for DGE? 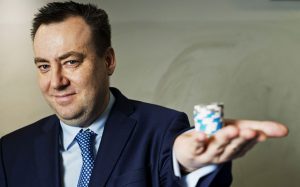 GVC CEO Kenny Alexander says that a New Jersey license would offer his company “optionality” in the US. (Image: telegraph.co.uk)

GVC Chief Kenny Alexander has said that he expects to hear whether his firm will be licensed to operate in New Jersey within the next few months.

GVC acquired bwin.party, which offers online poker and casino gaming in the state in partnership with Borgata, at the beginning of February, following a protracted bidding war with 888. Since GVC does not hold a license to operate in the state, it petitioned the New Jersey Division of Gaming Enforcement to allow operations to continue under the Borgata banner, while its own application for a license is considered.

The request was granted by DGE director David Rebuck, under the proviso that GVC should have no “operational or management control or influence” over the online poker site in the interim.

“We’ve filled in all the forms,” Alexander told Gambling Insider this week. “We expect to get a result in the next few months.

“We’ve done all we can and we await a decision on whether we get a license or not,” he added. “Personally, I’m very keen that we do get a license because I think it would give us some optionality in the US. We’ve done what we need to do and everybody has been interviewed. All the documentation has been done and we will now wait to hear their decision.”

Eyebrows were raised when one of GVC’s first moves was to return PartyPoker to 21 gray markets across Europe and the Americas, many of which had been abandoned in 2013 under the stewardship of bwin.party, probably in an effort to secure licensing in New Jersey.

Many felt the move would not sit with the strict New Jersey licensing authorities, and wondered whether GVC was prepared to abandon the state for new pastures in a bid to revive the ailing fortunes of Party Poker.

Was GVC endangering its license application in New Jersey by courting the gray markets? Well, maybe and maybe not. Last week the New Jersey Division of Gaming Enforcement moved to clarify its position on licensees that engage with such markets.

Black-market operators, said the DGE, are a no, no, of course; these are operators that offer their services to residents of countries whose government has passed clear laws that prohibit online gaming, such as most of the US.

It’s clear that gray market operators are considered by the agency to be in a very different category. Gray markets refer to countries where unregulated gambling is illegal, but governments haven’t passed laws specifically forbidding remote gaming, nor do they seem particularly interested in doing so, or pursuing those that offer it, Canada being the supreme example.

The DGE does note, however, that there are very different shades of gray, in which case “the Division will individually examine each jurisdiction in which a New Jersey applicant or licensee operates pursuant to the above analysis to determine whether Internet gaming activities in that jurisdiction are objectionable and would therefore be considered a negative factor in assessing suitability for licensure.”

In the meantime, Borgata is taking no chances; it’s understood that the casino has already explored the possibility of partnering with Pala Interactive for online poker and GAN for online casino should GVC’s activities prove to be too “gray” for the DGE’s liking.