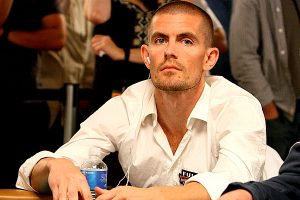 At the last minute, Gus Hansen was a no-show for his Heads Up Showdown with fellow Full Tilt sponsored pro Viktor “Isildur1” Blom. (Image: hstakesdb.com)

Gus Hansen’s Full Tilt showdown with Viktor Blom did not happen, because the popular Danish pro was a no-show. Life as a professional poker player often reaches a milestone when a major site wants to bring them on as a sponsored player. Playing under the banner of PokerStars, Full Tilt, or any other big name has its perks, but also its pressure. And for the unpredictable Gus Hansen, the pressure has certainly got to be building up.

Gus Hansen was set to appear in Full Tilt Poker’s highly promoted Heads Up Showdown, but failed to show due to “unforeseen circumstances.” Hansen, who is one of two players compromising “The Professionals” sponsored players at Full Tilt, was going to play against his fellow Professional counterpart, Viktor “Isildur1” Blom.

Hansen and Blom were to face off in a three-game heads-up match, where the winner would receive $50,000. With both players being sponsored by Full Tilt, the site heavily promoted the match. Players had the chance to join in one of two $10,000 freeroll tournaments based on who supported Hansen or Blom, and then bet on who would win. Full Tilt even got social media involved and let players vote on what game the two Professionals should play (No Limit Hold’em won by a landslide, with 49 percent of the vote).

Despite the high-profile nature of the match, Hansen pulled out at the last minute. No explanation was given, aside from an issued statement to Pokerfuse by a PokerStars representative. “We regret that Hansen was unable to play, and we apologize to his fans,” said the statement. Unfortunately, due to unforeseen circumstances, Gus Hansen did not play the heads-up match against Isildur.”

To fill in for the Hansen-sized hole, Full Tilt brought in Jake Cody, a PokerStars pro. Blom and Cody played the best of three Stud Hi/Lo, Triple Draw and No Limit Hold’em freeroll sit and gos. Fans who ultimately wanted Blom to win the Heads Up Showdown got their wish, as the pro beat Cody and won the $50,000.

In the original terms of the Showdown, the loser between Hansen and Blom had two options: release a video of themselves singing the winner’s national anthem, or go to the tables and play 1,000 hands of $0.05/$0.10 Razz. Since Cody came in as a last-minute replacement, he won’t have to subject himself to either forfeit.

Though Hansen may have had to bow out of the Showdown for a serious reason, many will speculate as to the true cause. The surprising move is only made more suspicious by the pro’s recent Full Tilt losses, which surpassed $20 million last week.

We’ve already speculated on how Hansen managed to make this career low and still have the momentum (and funds) to keep playing. Having a “Professional” with this massive of a sore spot on his career couldn’t possibly sit well with Full Tilt. In the weeks to come, a clearer picture might be seen if Hansen continues to add or subtract from his recent string of losses.

guess that is why i couldnt find it

Can’t really see the interest in this match-up in the first place. I mean $50k to the winner when they’re normally playing pots much larger than this. And who cares who wins between Gus & Isildurr?