Gus Hansen is Loss Leader on Full Tilt at Minus $20M 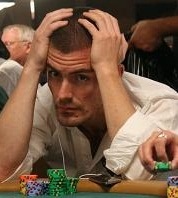 Gus Hansen: on a Full Tilt loss-athon, but then where on earth does he get all this money from? (Image: carbonpoker.ag)

Gus Hansen’s losses on Full Tilt surpassed $20 million this week, a career high and a massive career low all rolled into one. The indefatigable cash game high roller dropped $635,549 during this week alone to take his lifetime Full Tilt deficit to $20,109,870.

His current tally stands at -$18,908,870, according to the Highstakesdb.com, so thankfully he clawed a little bit back over the past couple of days. Well, we say “a bit,” but that bit is $1.2 million, several times over the price of a typical house.

Let’s hope that this is the beginning of the mightiest comeback of all time. But it would be just that, the mightiest, because Hansen is stuck more than any online poker player has ever been stuck in the history of the game, and that must be a lonely kind of feeling.

Hansen has always been famous for his crazy swings; reveled in them, even. A self-proclaimed gambler, it’s clear that he doesn’t think about money in the same way as the average Joe might, but, really, is this just too much now? Isn’t it time to drop down in stakes? Does the Great Dane have a problem? Does he need help?

And (not that it’s any of our business, but we just can’t help ourselves) just where does he get his money from?

The strange thing is that the “is Gus broke?” rumors have dogged him since the early days of his poker career, probably because of his perceived reckless gamble and apparent disregard for money, and yet to stay in the game, he must have always been more successful at acquiring money than losing it. Stands to reason, right?

Of course, in the mid-noughties, he was one of the most successful tournament players around. He appeared to win WPT main events for fun, whenever he felt like it. Hansen won four WPT’s in a year and a half, and made six final tables. Today, his tournament winnings stand at over $11 million, which makes him one of the winningest tournament players of all time.

What else? Along with Tony G and Erik “Erik 123” Sagstrom (remember him?), he founded the online poker site Pokerchamps.com, which was sold to Betfair in 2005 for a rumored $17 million. He must have made decent money as a world-class backgammon player, too, and probably won a fortune in private high-stakes cash games (although he always seemed to be losing in Bobby’s Room, the uber nosebleed private section at the Bellagio, the rumors said); presumably he received, and still does receive, a healthy income from sponsorship and endorsements; but that is all mad speculation.

The truth is we have absolutely no idea how a player can blow through $20 million and still, apparently, just have money. As the man himself said recently: “I still have money in my pocket. My online numbers aren’t looking too pretty, but I can still afford a sandwich.”

Although if he continues in this vein, he should probably start thinking about making his own sandwiches.

Wow! Really hope he can make an incredible come back..who knows? He just might do it!