To many, the Super Bowl isn’t just about which team wins. Equally important to gamblers is the scoring margin, total points scored and, in some cases, if the pre-game coin toss lands on heads or tails and other whacky prop bets. 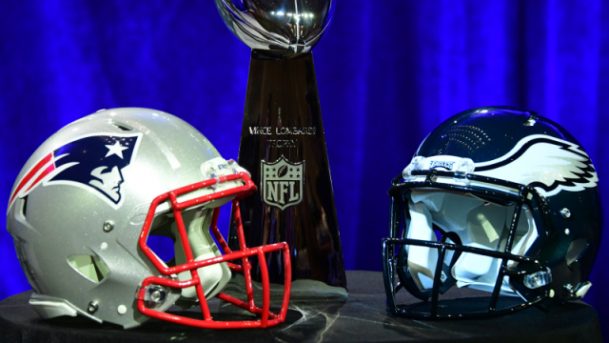 The New England Patriots are favored by five points heading into Super Bowl LII against the Philadelphia Eagles. (Image: nesn.com)

The defending champion New England Patriots, led by the “GOAT” Tom Brady, enter Super Bowl LII as the favorite (holding steady at -5 throughout game week at most Las Vegas sportsbooks) to defeat the Philadelphia Eagles.

New England is favored due to reputation and Super Bowl experience. While few on the Eagles have played in the big game, the Patriots have made it this far three of the past four seasons, and Brady is quarterbacking his eighth career Super Bowl, an NFL record.

But before you bet your kid’s college fund on the Patriots to cover the five points, you should take into consideration one interesting statistic.

The combined scoring differential in New England’s eight Super Bowl appearances under coach Bill Belichick is 26 points, with last year’s 34-28 win over the Atlanta Falcons being the largest deficit.

If the above stat scared you away from betting on the point spread, there are hundreds of other prop bets, even some goofy ones, available if you need your gambling fix.

Perhaps, the strangest prop bets that you can actually make are on the national anthem. Will Grammy-award-winning singer Pink forget or omit a word during the “Star Spangled Banner?” The line on “yes” is +300, and “no” at -500.

How long will the national anthem sung by Pink last?

If you’re a big fan of Pink, or at least green, there are a couple of other ways to get action on her actions, including the color of her hair.

What color of liquid will be dumped on the winning coach?

Not every prop bet involves colors. Many ask bettors to predict an individual player’s Super Bowl performance, first half point totals, who will score the first touchdown, and other less whacky wagers.

Tom Brady, arguably the best quarterback of all-time, is expected to perform at a high level during Super Bowl LII, as he has done in most big games throughout his career.

But just how dominant will the 40-year-old former backup at the University of Michigan be on Sunday?

If history is any indication, Super Bowl LII will be a competitive battle between two great football teams. Will New England find a hole in Philadelphia’s dominant defense? Or, will the Eagles, led by backup quarterback Nick Foles, pull off the upset?

Nice at least this is present on USA-Friendly rooms so none will miss the action! Available on Bovada-ACR and BOL

I have never understood the crazy prop bets that have nothing to do with the sporting event being played…they are all just coin flips, so if you wish to gamble on a 50/50 prop, just flip a coin…it’s easier.

Millions of people don’t simultaneously watch coin flips so it’s not as much fun as a super bowl prop bet. I guess, I’ve never made a prop bet, but I think they are fun. The wackier the better lol