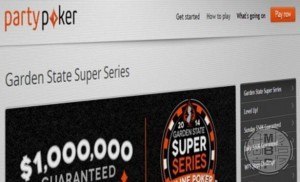 The Garden State Super Series 2 is coming back to New Jersey with a whopping $1 million prize pool.

PartyPoker NJ and BorgataPoker.com released the official full schedule for the second run of the Garden State Super Series. The announcement comes a few weeks after the online partners gathered feedback from the poker community on a potential draft schedule.

The full schedule of tournament events culminates in at least $1 million in prize money available to win over the course of the two week series.

The second running of the Garden State Super Series (GSSS II) will take place from January 11 through the 25 at NJ.PartyPoker.com.

GSSS II is spread out over 23 different events, with each competition being available at three different buy-in tiers (low, medium and high), making for a total of 69. Starting times for the events will be staggered every half hour with weekday happenings starting at 6:00 pm and weekend events starting at 4:00 pm.

Satellite tournaments began on December 8 and gave New Jersey PartyPoker players a shot at winning entry into GSSS II for as little as $0.25.

But one thing PartyPoker and Borgata are likely hoping won’t return is another server blackout. In September, the first GSSS experienced a server issue that led to the cancellation of the Main Event. The new additions look to be a step in the right direction.

Due to player feedback from forums, the finalized schedule for GSSS II reflects most of their suggestions. The payout structure has been adjusted this time around. Events with higher buy-ins will have fewer players cashing for larger amounts with top finishers getting more prize money. Events $20 and under will pay 18-20 percent of the field.

This time around, a larger focus has been given on non-Hold’em events and format variety as well.

New event variants are being introduced into GSSS II. Speed Down is partypoker’s new format that will make its debut at Event #21, where blind levels will gradually shorten in length. Event #15 debuts the No Limit Hold’em Heads-Up format. Event #16 is a Super Bounty event where 50 percent of the entry fees go towards bounties and 50 percent go towards the prize pool.

More diversity will be seen in the GSSS II events as Deepstack, 6-Max, Rebuy and Bounty all find their way into the series’ schedule.

GSSS II’s Main Event is scheduled to run on the final day of the series. This is unlike the first run of GSSS, where the Main Event took place midway into the series.

The full list of GSSS II events and further details can be found at NJ.PartyPoker.com.