The Game Show Network (GSN) has threatened legal action on Doug Polk, forcing the poker pro to delete many of his YouTube videos. The cable channel took time away from its busy schedule of rebroadcasting repeated episodes of Family Feud to protect its brand. 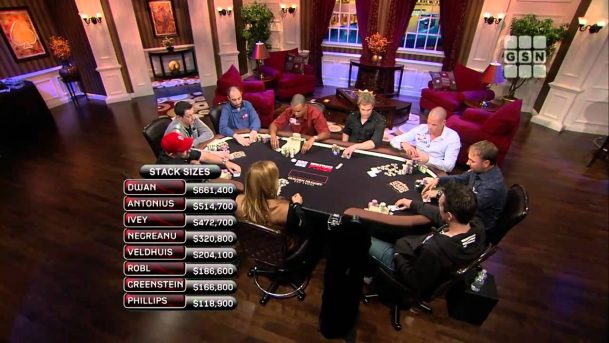 Polk has more than 68,000 subscribers on his YouTube channel. In his “Poker Hands” videos, Doug analyzes the play from televised poker shows.

Many of his Poker Hands videos feature a hand from GSN’s defunct High Stakes Poker. The show was discontinued in 2011, but that hasn’t stopped the cable network from ensuring old episodes aren’t being distributed illegally.

An unnamed attorney representing GSN sent Polk a letter informing him he’s not allowed to use unauthorized content. In response, the poker pro removed 17 videos from his YouTube channel. In a new video, he explained to his followers what happened, but didn’t share details of the letter. The heads-up specialist feels he has done no wrong.

“I believe I am firmly in the right here on this issue,” Polk said on his new video. “You can take content, you can take videos and, if what you’re doing to them is transformative, you know, makes it into entirely new content for comedy or educational purposes, or for several different things, then using those clips, using that video falls under fair use.”

The poker coach admits his legal knowledge isn’t comprehensive. But he does believe that since he uses the High Stakes Poker videos for educational purposes, he should be entitled to share them and has done so legally in the past.

Does Polk have a right to share these clips under the “fair use” doctrine that permits limited use of copyrighted material without acquiring permission from the content owner? One wealthy businessman doesn’t think so.

Bill Perkins, a regular in high stakes tournaments and cash games, not only believes Polk doesn’t have the right to the content, he’s willing to put his money where his mouth is.

The hedge fund manager claims Polk isn’t using the content legally, because he derives revenue from it. Polk generates ad revenue from his YouTube videos and also sells poker lessons at Upswing Poker, another place he shares poker videos.

On Twitter, Perkins let Polk know he enjoys his videos and feels they are educational. But, since he generates revenue from the videos, Perkins maintains that GSN is within their rights to demand he remove their clips.

Always the prop bettor, Perkins even offered up “3 to 1” odds on bring right.

Looking Back at High Stakes Poker

High Stakes Poker was one of the most popular TV poker shows ever. It was the first televised high stakes cash game, produced by Mori Eskandani, winner of the 2017 Lifetime Achievement award at the recent American Poker Awards.

The show was on during the poker boom era, from 2006 to 2011. After Black Friday, the sponsors fell off the map and the show came to an abrupt halt.

In total, there were 98 episodes shot over seven seasons. Gape Kaplan hosted the first six seasons and was replaced by Norm Macdonald in Season Seven. Poker pros such as Phil Ivey, Doyle Brunson, Phil Hellmuth, and Daniel Negreanu were all regulars on the show.

Its really disappointing to watch Doug is treated in this case. His Channel is the best for youg poker player and his community growing fast. Dont think thas is the right way.