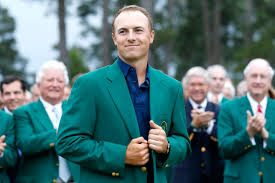 Jordan Spieth, the 21-year-old golf hotshot, is something of a poker player according to a recent interview.

The US golfer from Texas, who recently finished battling against the best golfers in the world at the British Open, recently told reporters that he’s been known to wear the famous green jacket (given to the winner of the Masters) in his home games.

Reported by the LA Times, Jordan Spieth, who was looking to win his third golf major of 2015 this month at The Open, enjoys wearing the iconic garment at the poker table as a way of reminding his opponents that he’s a fearsome competitor.

“I took it out and wore it to play poker with a couple of my buddies. That blew them away,” said Spieth when asked what he does with the winner’s jacket.

As well as his win giving Spieth a new prop for his home game, the hotshot golfer also has a dining table that transforms into a poker table and he regularly uses it to play with his friends according to the New York Times.

Joining Spieth in his love of poker is his caddie and former teacher, Michael Greller.

The first indication of Greller’s love of poker came earlier this year when he worked with Spieth at the Masters.

Despite a solid lead in the biggest competition of his life, Spieth almost lost his focus on the final nine.

Fortunately, Greller was on hand to compare Spieth’s situation to a game of poker.

Stating that Spieth was in a position where he was holding pocket aces, Greller told his player to relax and let his opponents take all the risks because he had the pre-flop (game) advantage.

That advice seemed to work as Spieth went on to win the title and become the hottest prospect in golf.

A Tradition of Golf to Poker

Of course, Spieth isn’t the only golfer that enjoys a few rounds of poker when they’re not swinging different sized clubs.

Tiger Woods is famous for his love of poker and regularly holds a charity tournament each year to raise funds for his foundation.

Everyone from Doyle Brunson and Phil Ivey, to Phil Hellmuth and Erick Lindgren have teed off in the name of competition and, of course, money.

In fact, Lindgren was part of one of the most famous golf prop bets in history when he risked his life to win $340,000. The premise was simple: play four rounds at a Vegas golf course and shoot under 100 each time within a single day.

Unfortunately for Lindgren, the premise was the only simple thing about the bet as he was pushed to the point of physical exhaustion while completing the task.

Although he ultimately wound up winning the bet, Lindgren reportedly had to visit the hospital soon after the win as the 106 degree heat had taken its toll during the 14 hour session.

While it’s unlikely Spieth will attempt a similar type of prop bet with any of his poker buddies, it’s good to see that yet another sportsperson is willing to publically endorse poker.

Mr Spieth sure looks sharp in that jacket ! lets hope he has a long + fulfilling career .