The Global Poker League is now entering its second week, following a controversial start that included what appeared to be some player indifference, confusion from viewers over the Cube concept and when it would be used, and a major computerized misdeal.

With Week Two comes a chance to hopefully make a better impression, with new matches and new faces hitting the virtual felt. 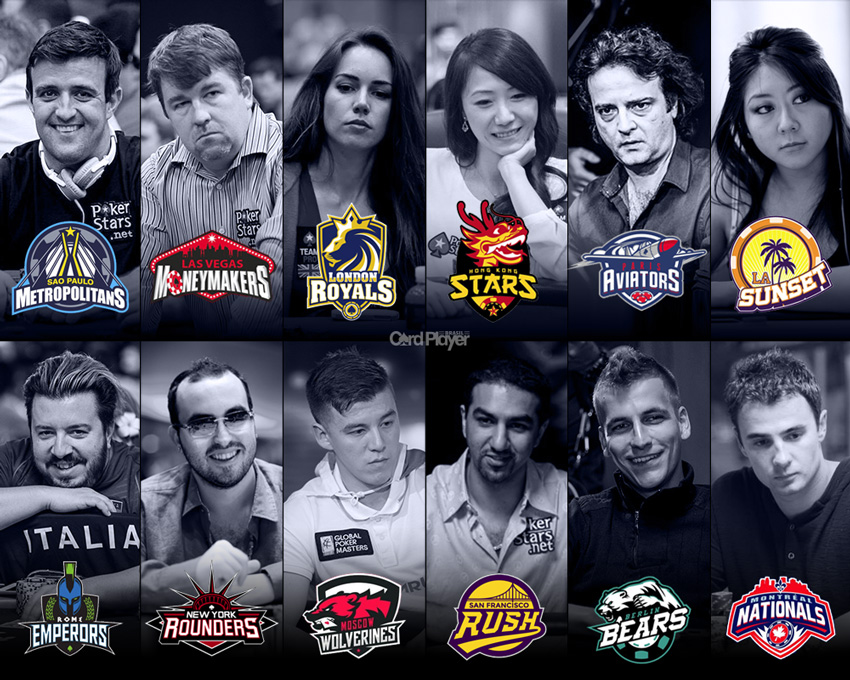 The 12 teams of the Global Poker League head into their second week of online play.  (Image: cartasnamesapoker.com)

After three days of play online, the managers feeling the best are Celina Lin and Bryn Kenney. Lin’s Hong Kong Stars scored the most points (18) and hold a two-point advantage over the Paris Aviators in the Eurasia conference. Kenney’s New York Rounders picked up 16 points and lead the Americas conference.

Each Wednesday, both conferences hold a six-max sit-and-go tournament. One player from each team competes, and team points are awarded based on how they finish. Additionally, each team selects a player to be its representative in a heads-up match once per week. Team managers select who will play each match.

One week doesn’t a season make, but the San Francisco Rush and Berlin Bears, especially, will need a better showing in Week Two, or they’ll be in trouble. Those teams sit at the bottom of their respective conferences and can’t afford to dig a deeper hole for themselves.

The second week of heads-up matches should be of interest to even the most casual poker fans. Randy Lew will attempt to get Hong Kong even more points when he faces off against Sam Trickett of the London Royals in the first heads-up challenge on Wednesday at noon EST.

Alexandre Luneau with the Paris Aviators versus Dario Sammartino of the Rome Emperors will follow. The Eurasia games will conclude Wednesday when the Moscow Wolverines’ Vladimir Troyanovskiy meets the Berlin Bears’ Dominik Nitsche in a match that Team Berlin desperately needs to win.

The Americas conference begins heads-up play on Thursday. The first battle is Thiago Nishijima from the Sao Paulo Metropolitans taking on Pascal Lefrancois of the Montreal Nationals at noon.

Next up, in a match poker fans will be waiting for, will be Phil “OMGClayAiken” Galfond (San Francisco Rush) versus Jason Mercier (New York Rounders). Galfond, of course, is known as one of the best online poker players ever.

The final contest of the week pits former WSOP champ Jonathan Duhamel of the Las Vegas Moneymakers against one of the most charismatic and feared players in the game, Olivier Busquet of the Los Angeles Sunset. These last two matches will likely draw the most attention.

GPL Eurasia begins six-max play on Tuesday at noon with two games. The Americas conference will hold its six-max games beginning at 3:30 pm EST. All Global Poker League contests at this point in the season are played online.

Will the Novelty Wear Off?

Creator Alex Dreyfus spent a great deal of time and money marketing the GPL prior to last week’s debut. The league founder reported on Twitter that the GPL’s Twitch stream had more than 429,000 views and 290,000 unique views last week.

That’s certainly an impressive feat, but this begs the question, were most of the viewers simply intrigued to see what the GPL is all about or will they stick around long-term? We’ll have a better answer to this question in the coming weeks.