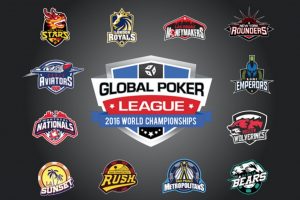 Global Poker League is in its 12th week. (Image: anytwo.com)

In case you haven’t noticed, and judging by the lack of discussion on social media you may not have, the Global Poker League is heading into the 12th week of its inaugural season.

It’s getting down to crunch time as the end of the regular season is less than three weeks away.

That means teams such as the Las Vegas Moneymakers, Rome Emperors, and Berlin Bears had better go on a heater or they’ll be left out of the post-season fun. These teams are in desperation mode, needing the equivalent of three consecutive two-outers on the river to make the playoffs.

On the other hand, there are a few teams that can coast into the post-season. The Montreal Nationals (181 points), lead the GPL Americas conference and are virtually guaranteed a spot in the playoffs. The LA Sunset (173 points), from the same conference, are in a great position as well.

Over in the GPL Eurasia division, things are a bit more competitive and open for the taking. The Moscow Wolverines (150 points) lead the way, but three other teams are within striking distance. Hong Kong Stars (140 points), Paris Aviators (136 points), and London Royals (134 points) are a heater away from the top spot. Even the 5th place Berlin Bears at 132 points can claim to still be in competition.

Play began at 9:00 am PST with a pair of six-max matches in the GPL Eurasia division. The match includes a five-time WSOP bracelet winner, online pros, and arguably the best female poker players in the world.

Six-max online poker play in the GPL Americas confierence begins at 12:30 pm PST on Tuesday with six players, one from each team, competing for important late-season points.

The six players include a former WSOP Main Event champion, one of the top World Poker Tour performers, and some skilled online pros. Chris Moneymaker, the team manager of the Las Vegas Moneymakers, will at least try and bring his last place team to respectability.

But he’ll have to do it against some of the top players in the world:  Bryn Kenney (New York Rounders), Chance Kornuth (LA Sunset), Anton Wigg (San Francisco Rush), Mike McDonald (Montreal Nationals), and Darren Elias (Sao Paulo Metropolitans).

Heads-up play for GPL Eurasia takes place on Wednesday beginning at 9:00 am PST. GPL Americas will follow suit on Thursday at the same time.

Luck Andrey Pateychuk (Moscow Wolverine), and I wish you a good game.