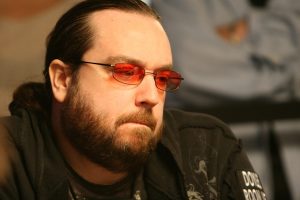 Todd Brunson made his Global Poker League debut, and it didn’t go very well for him. (Image: WPTbootcamp.com)

The Global Poker League Eurasia Conference has concluded its fourth week of the league’s inaugural season. A third of the way through the regular season and three teams are in a close battle for conference supremacy. And one team is in desperation mode already.

On Wednesday afternoon, Todd Brunson (Rome Emperors) and Jeff Gross (Berlin Bears) met in a crucial heads-up match to finish up the week for the Eurasia Conference. With both teams desperately needing points to prevent heading into week five with a massive deficit, it was Gross who dominated the game.

Rome has just 28 points through four weeks, 25 shy of the first place Moscow Wolverines. Berlin sits at a more competitive 39 points. The season isn’t over, yet, for the Emperors, but Brunson’s heads-up performance certainly didn’t do his team any wonders.

Brunson, making his GPL debut, ran into some horrible luck in the first match. On just the ninth hand, his pocket aces were cracked on the turn when Gross hit a gut shot straight draw. All the chips were in the pot on the turn and the match was quickly over.

Games two and three didn’t go much better for the son of one of poker’s greatest legends. Gross simply hit too many hands and swept the three matches.

The Wolverines held on to win the first match, but Vanessa got her revenge in game two. In the rubber match, Filatov won a 60/40 to finish her off. Moscow received six points and London earned three.

Hong Kong (Randy Lew) and Paris (Bertrand Grospellier) then met in a crucial game. Both teams are in contention for the top spot in the Eurasia Conference. Paris had a 48-40 point edge when Lew and ElkY met.

With an opportunity to create some separation from Hong Kong in the standings, Lew got the best of ElkY, winning two out of three games. With Moscow out in front with 53 points, Paris is in second with 51, and Hong Kong now is close with 46 points.

Before the heads-up play began for the week, six players (one from each team) took place in two six-max tournaments with seven points in each game going to 1st place, five to 2nd, three to 3rd, two to 4th, and one to 5th. The first game went as follows:

Filatov was the big winner in six-max play, scoring a total of 12 points for his team.