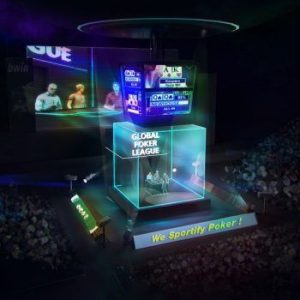 The future of poker? Could GPI’s” The Cube” revolutionize poker as a spectator “sport”? (Image: pocketfives.com)

The Cube, according to the latest GPI press release, is a portable, 20-foot, one-way soundproof, glass case that will house final tables while offering “spectators the first-ever immersive poker event in the world.”

It’s all about enhancing the live poker spectacle. With players operating from inside the Cube, live spectators will be able to view hole cards in real time via a projection from the top of the structure, which will also relay live data on each hand as the game plays out.

“On-site fans will be able to get the same level of immersion they have when they watch a poker show, but with an actual seat next to the live action,” Dreyfus explained.

GPI has announced that the first season of the Global Poker League will debut during the first quarter of 2016 and will include 12 “franchise” teams, representing different cities, which will be split into two different “conferences,” the Americas and “EurAsia.”

The Americas League will include New York, Los Angeles, San Francisco, Las Vegas, Toronto, and Sao Paolo, while EurAsia is likely to include teams from London, Paris, Prague, Barcelona, Moscow and Hong Kong, according to the GPI press release.

“The league and its innovative format all form part of CEO Alexandre Dreyfus’ vision to ‘sportify’ poker in a bid for the Global Poker Index to become the equivalent of the NASCAR, NFL, NBA, ATP, or PGA for poker,” it continues.

All PR talk aside, GPI is prepared to devote a large amount of its own resources to create new and  compelling dynamics in a bid to revive mainstream media interest in poker.

Dreyfus is determined to reshape poker as a true spectator sport and it will be interesting to see if this “team” poker concept, which has always fallen flat when it’s been attempted in the past, will catch on.

Poker is an individualistic game, but hey, so is golf, and the Ryder Cup draws millions of viewers, so why not?

This is a question that Dreyfus has been exploring passionately: “During the past 12 months, I have been traveling a lot to visit different events and understand how things work in other domains,” he explained in an interview with PokerNews.

“I have seen how engaging e-sports events can be and how people react to them. So my question has been, can we do in poker what others are already doing in other industries?

“For years, the industry focused too much on players and customers; now we believe it’s time to shift the paradigm and think more about what can we do to create more ‘poker fans’ and keep them interested in the game.

“We wanted to think out of the box and to create products that focus on fans, not on players.”

Or should that be outside the cube, looking in?

if they let the players fight , like in the octagon , a ready audience would instantly be found !