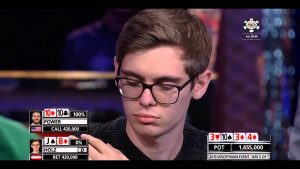 Fedor Holz is in the lead as we head into the home stretch in the Global Poker Index Player of the Year standings. (Image: YouTube)

With the year winding down, poker fans are beginning to focus on the Global Poker Index Player of the Year race.

It should come as no surprise that Fedor Holz is holding onto the top spot (3,644.80 points).

The 23-year old German has made a fool of the competition this past year. Despite being “semi-retired,” Holz has dominated the high stakes poker scene in 2016, putting together one of the most impressive year’s in poker history.

Fedor’s year began with a title in the $200,000 buy-in World Poker Tour National Super High Roller in the Philippines back in January. The $3.4 million he won was only the beginning.

After a handful of six-figure paydays, he got back to winning the “real” money in early June at the $300,000 buy-in Aria Super High Roller Bowl. Holz finished runner-up to Rainer Kempe and took home $3.5 million just as the World Series of Poker began.

He didn’t play a full WSOP schedule like Jason Mercier and some other grinders. But he did cash four times at the summer series, including a dominating (and lucky) performance in the $111,111 buy-in High Roller for One Drop event. Holz outlasted a field of 183 players to win just a shade under $5 million.

If you thought he was going to stop there and pack it in for the rest of the year, you were wrong. A month after the WSOP concluded, the German got bored of retirement and decided to head out to Barcelona, Spain to win the EPT Super High Roller for $1.4 million because why not?

Holz’ 2016 poker season has made Mercier’s WSOP run seem lame. Mercier, the 2016 WSOP Player of the Year, won a pair of bracelets and had a 2nd place finish all in the same week.

But he ranks just 12th on the GPI Player of the Year standings (2,931.51 points). That tells you just how impressive Holz, and many others, have been this year.

Byron Kaverman barely edged out Anthony Zinno for 2015 GPI Player of the Year. This year, the Ohio native hasn’t even cracked the top 100. It’s tough to repeat in a game of high variance. Zinno is also non-existent in this year’s top 100.

Alex Dreyfus’ Global Poker Index awards points based on a number of variables to players who cash in live poker tournaments. For a player to receive credit for the event, the tournament must have at least a $1 buy-in, have at least 21 players, and be open to the public.

The Big One for One Drop, for example, wasn’t factored into the rankings because it was only open to non-professionals.