Giving Back: Poker Players Who Gave as Good as They Got in 2017

When the general public thinks of poker players, the first image that comes to mind for many is that of a shark feeding on unsuspecting prey. But when disaster strikes or a worthy cause comes to public consciousness, we see time and again plenty of generous people who emerge from the poker community. In 2017, poker players did a lot not only to support charitable causes, but also stepped up to throughout the year to lend more than a helping to people in serious need. 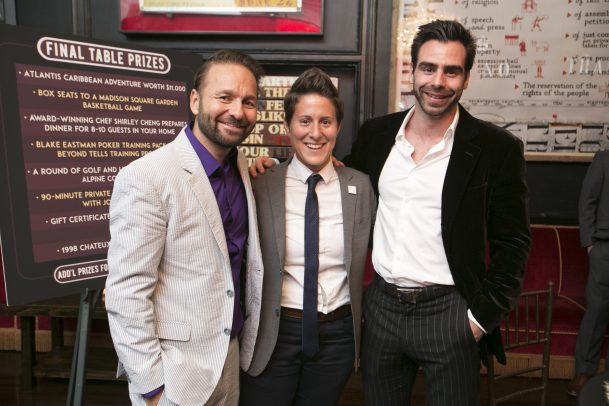 Daniel Negreanu (left) was a regular at charity poker tournaments in 2017, including the “Justice is Blinds” event put on by Vanessa Selbst (center). (Image: Urban Justice Center)

Poker Pros Help Out After Hurricanes

Hurricanes were a major cause of concern in Texas, Florida, Puerto Rico and other parts of the US this year, and poker players were as involved as anyone in trying to help bring relief to the affected areas.

In the aftermath of Hurricane Harvey, many poker players stepped up to offer condolences to the victims, particularly in the city of Houston. 2010 WSOP bracelet winner Chance Kornuth pledged 5 percent of his winnings from the World Championship of Online Poker to charities helping in the aftermath of the storm. Actor and PokerStars poker ambassador Kevin Hart made a personal plea to his 34.7 million Twitter followers to donate money to relief efforts, while donating $50,000 or his own money to the Red Cross.

But perhaps the most impressive efforts were made by players who donated their time rather than their cash.

Poker pro Ray Henson piloted a motorboat through flooded neighborhoods in order to transport supplies and provide transportation for those people who were stuck in the floodwaters and wanted to evacuate. Meanwhile, Gavin Smith used his garage in the Woodlands (part of the same metro area as Houston) as a location where donations could be dropped off and then distributed to local shelters.

In October, Hurricane Irma caused significant damage to much of South Florida. In response, PokerStars and the Seminole Hard Rock Casino teamed up to sponsor a $300 buy-in charity poker tournament in which all proceeds were given to those impacted by the storm.

Players Step Up in Wake of Vegas Tragedy

Unfortunately, there were times this year when people caused nearly as much devastation as Mother Nature. On Oct. 1, 58 concertgoers were killed in Las Vegas during the worst mass shooting in modern American history.

Naturally, the poker community stepped up to do what they could for the victims in the days that followed. Poker vloggers Brad Owen and Andrew Neeme used their livestreamed poker game at the Bellagio as the impetus for a fundraiser that benefited families impacted by the shooting. They raised more than $1,700 on site, not to mention countless online donations from their audience, all of which went to a larger fundraising campaign organized by Las Vegas retailer Zappos.

Some of the most prominent poker pros have used their celebrity status to run events that are designed to raise money for causes near and dear to their hearts. In September, Vanessa Selbst held her third annual “Justice is Blinds” charity tournament. Players ponied up $1,500 or more each for the event, which raised money to benefit the Urban Justice Center, a non-profit organization that provides legal services to New York City’s most vulnerable residents.

November saw the 10th annual Jennifer Harman Celebrity Poker Tournament at Planet Hollywood in Las Vegas. The tournament attracted a who’s who of the poker world, including Daniel Negreanu, Kathy Liebert, and Scotty Nguyen. The event, for which CardsChat was a media sponsor, attracted 224 players, with all proceeds benefiting Nevada SPCA, the only large-scale no-kill animal shelter in Las Vegas.

It’s always nice to see big name stars ,not only in poker, donate $$ or more then that ,their time to functions that will attract people that want to see them. The attraction causes people to donate money for so many dsifferent charities,Take NFL star howie Long’s son donating his whole years salary to a great cause, which surely isn’t chump change

Poker is a great way of generating funds for charity or needy people or places, such as after natural disasters. What should also get a mention is things such as the CardsChat community who also came together to make a donation following a natural disaster this year. Well done to all the poker pro’s and to all of the wonderful CardsChat members who made a positive difference this year to those who needed support and assistance.